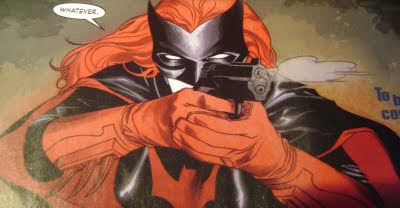 Before my departure from the states, I made one last visit to the comic book shop, bought my books on hold, and picked up a few extra comics to hold me over while I’m in Australia. I took a chance on a series that has flown under my radar for months. It’s not one that I’ve heard many people talking about, positive or negative. But boy am I glad this jumped out at me from the shelf, after months of walking by and thinking “meh, can’t be that good.” WRONG. Oh so wrong. I’m talking about Detective Comics. Yes, the same one that has been coming out for 60+ years.

If you are reading any DC title right now, you’re well aware, the Caped Crusader = dead and gone. And how did the smartest man alive meet his end? A lightening bolt? Helicopter crash? Death by sloppy writing? If you read Final Crisis and got a clear picture of how he died, please enlighten me. What I did get was Superman holding the crispy remains of Batman at the end of Final Crisis 6, and the Flash and Green Lantern remembering the fallen hero while standing at his unmarked grave in Blackest Night 0. Those are some visuals that are easy to comprehend.

Currently DC has various characters filling in for Bruce’s titles until his triumphant return from the beyond (it’ll happen sooner rather than later). For this very reason, I have been staying clear of the Batman books. I truly resent when huge, central characters are killed off with the intention of bringing them back shortly after. It’s a tacky way of getting attention to drum up sales (Helloooo Death of Superman). Even when the resulting storylines are well written (see the current Captain America series) it just feels cheap, like reading it is pointless since the book will return to the status quo as soon as sales are down and the editor needs something to bring wayward readers back in. That being said, I am already annoyed that Detective’s current direction is a temporary venture.
Lately it seems that my favorite titles have been superbly well written, with some good artwork to boot. Good, but not great. Currently, Detective has some truly spectacular and noteworthy artwork. Like holy moses, this book could be written in Latin and I’d still love and understand it. Being well written by Greg Rucka is just an added bonus to this book! I don’t even know what J. H. Williams III has drawn before, but I fear he will go the way of James Jean (of Fables cover art fame) and eventually leave comics for more lucrative illustration work, he’s just that darn good. And Williams is doing the interiors folks, not just the covers! I will say too, Dave Stewart is the colorist on this book, and he really adds that extra something that pushes the book into “work of art.” Am I making you the least bit curious? I sure freaking hope so. If not, I’ve got a few examples as evidence to my point. I’m going to lobby DC to put this run in a giant, absolute edition; it really deserves the over-sized treatment. This is the kind of fervor the book has inspired, and I’ve only read the first issue (Detective #854)!

As you can see from the included sample pages, Batwoman has taken over Detective. There was some hoopla a while back about her becoming a lesbian, but besides that, she really hasn’t been a major player in the DCU. Well Greg Rucka, congratulations good sir, you have made me care about an otherwise ignorable character. Not only that, but Rucka has taken something that has been missing from the Batman books of late and showcased it beautifully here. I’m talking about relateability. Recent years have shown the character of Bruce Wayne as more bat than man. When was the last time he dated someone who wasn’t a criminal, related to a criminal, or simply wasn’t aware of his identity as Batman? His life has been so deeply entrenched in the world of “Batman” that it has been easy to forget the man behind the cowl. What Rucka shows us now is Kate Kane, a person struggling to balance a normal life with the duties of Batman. Her girlfriend, unaware of her late night crime fighting, assumes her tardiness and obvious sleeplessness means she’s been “tomcatting around town.” I don’t know if Batman’s girlfriends would ever accuse a sleep deprived Bruce of cheating. See included an image from part of this confrontation, as well as a delicious exchange between the new Batman and Bat Woman as their paths cross on the patrol.

Well, I think I’ve done my best to sell this book to you all. If not…I don’t know if there’s much else to say that would convince you otherwise (there’s an additional Question story in the back of each issue?). You’re either rushing to get this book now, eager to drink in a full issue of the beautiful artwork and follow the struggle of this character; or you’re just patiently awaiting the return of Batman. If his return is as muddled as his death, I suggest you get out there and enjoy this fantastic book while you can. It may not be nearly as interesting once Bruce is back in town.
awesome comics Batman Batwoman dc detective comics greg rucka j.h. williams III new new new pull list recommended reading