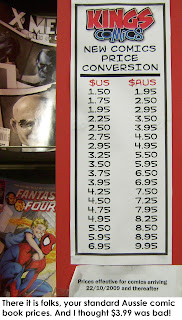 With the recent announcements from both DC and Marvel that they would release all new comics at $2.99, I find myself torn between feeling relief / confusion / skepticism. This drastic measure is no doubt a direct result of rumbles amongst fans and retailers alike the past few months, not to mention slumping individual issue sales. Until these changes hit the shelves, it's hard to say how this gamble will play out for the big two - will it be a winning move or a bust? Here's a look at the possible outcomes from both sides.

2010's mantra among fans seems to be "less is more" as pull lists have gotten shorter and shorter for many regular customers. Citing high price tags and waning interests, fans are finding that they can live without the five ongoing Avengers titles and stick to one or two. With the prices being lowered, those that dropped a title for the high price tag may decide to start reading it again. A 25% discount is pretty significant, and will be noticeable for fans perusing the shelves. It's also a sign that publishers are actually listening to fans with this sweeping price cut, and customers are likely to show their appreciation by picking up more titles at the (kind of) new, cheaper price tag. What makes this change so unique compared to other industries is the lack of competition. This is not the result of an outside company offering deeply discounted alternatives, it seems to have been done "for the fans". Of course, retailers are always open to ways of bringing in new readers, and I doubt the big two would implement such a change without the support of the comic book stores.

Cheaper books = Saving More, Not Spending More
For readers that dropped certain titles at $3.99, will they even notice when the price goes down? Unfortunately for the big two, the damage is done and there will be no going back for some customers. Once a reader finds they can drop a title and not miss it, will it matter whether or not it is cheaper? Or say the titles a customer currently reads are at $3.99. They will notice the discount once prices are lowered, but will that prompt them to pocket those savings or go back to the shelves for another title? If a reader can receive just as much satisfaction from a $10 purchase when they were previously spending $14, what's the incentive to spend the money on a new title?

In all of these possible scenarios, there is the opportunity for publishers to lure back customers that have cut back a book or two. But what about the customers that have quit reading individual issues entirely? Those folks will be a little harder to win over, especially if they no longer go to their local comic book store on a regular basis. It reminds me a lot of when Blockbuster pulled out all the stops in an effort to lure back everyone who left them for Netflix. After no-late fees, subscriptions, delivery services, and $1 kiosks, guess who recently filed for bankruptcy? It wasn't just that customers found a cheaper alternative; after being price gouged for years, the better offers weren't enough to gain renter's loyalties once again. The same could be true for fans that gave up on comics when books went from $2.99 to $3.99.

Without a doubt I will probably pick up a few more titles with a price decrease. Or perhaps more toys, or trades, or candy bars, whatever strikes my fancy that week. My budget is set and I like to try new things when I can afford it. I will say though, the titles that I did drop due to price I probably won't get again. Ender's Game is a perfect example. At $3.99 per issue, that title made for a tough sell when I could get it in trade form for so much cheaper. The amount of endless minis associated with the title meant I'd literally be spending close to a hundred dollars - on a series that was supposed to be six issues. A decrease in individual prices on that title will not be enough to bring me back; however, I may pick up the next science fiction classic mini that Marvel decides to release at $2.99 (Dune, Dune Dune!!!).

Unless readers buy more comics with their savings, retailers don't stand to gain much from a price decrease. Not all titles are returnable; in fact, a vast majority are not. Many stores have cut back on orders as well as selection in an effort to reduce the amount of unsold merchandise on the shelves. A smaller profit margin on all major titles doesn't seem like a very good way to help retailers' bottom line. Creators are also affected by the price reduction. A reduction in price may mean a reduction in pages. According to Marvel, they won't reduce the number of pages, but DC has vowed to reduce their 32 page titles to 30 pages to offset the price change. How does Marvel plan to cover the costs? Will creators still be paid the same per page? If these titles start coming out in newsprint (a cheaper alternative to the glossy pages currently being used) then I wouldn't question the publishers ability to lower prices; otherwise, the cost to publishers is unseen and therefore open to speculation. And that's where the "too good to be true" comes in. How are these books suddenly cheaper? Outsourcing to cheaper labor? Lay offs? Was I simply being ripped off when I paid $3.99 for the same content? Who is paying for that extra dollar now? "We'll be making less money" seems like an unlikely explanation. The paranoid consumer in me thinks it is more likely that they won't lose profits because they were making like gangbusters at $3.99 per book and a price increase from $2.99 was overkill in the first place.

I don't want to think that my demand for a cheaper product resulted in a pay decrease for someone else, or a reduction in quality. As it stands, it sort of makes buying these titles feel like going to Wal-Mart to save a few extra bucks - the savings always come at someone else's expense. At the end of the day, whether they price a title at $2.99 or $10.99 the same statement is true for me: "If it's not worth buying, it's not worth reading." I'll still only buy a book for what I feel it is worth, and despite Marvel and DC's generous offer to lower their prices, there is no guarantee my saved pennies will go back to them.

The above image was taken at King's Comics in Sydney, Australia, the land of always-expensive-comics.
comic book stores dc marvel prices retail