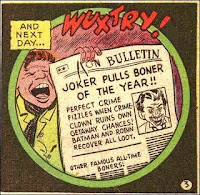 Syke! Marvel does not plan to roll back any current titles to $2.99. Expect to see minis, one-shots, and the horrible 90's sounding "Point 1" comics at the lower price. I guess everyone feels pretty dumb for believing those Marvel editors when they claimed otherwise at recent panels. The timing did not help either considering these (now retracted) announcements came hot on the heals of DC's promise to lower all $3.99 titles back to $2.99. Well played, sirs. Dirty, but well played.
Grant Morrison appears in the new My Chemical Romance music video! I saw this a few weeks ago when the video premiered after an episode of Jersey Shore (don't judge me) and I thought maybe I was  imagining things, but a quick trip to the internet has since confirmed the cameo. His appearance isn't that surprising since Morrison is a fan of The Umbrella Academy, singer Gerard Way's awesome Dark Horse book (Morrison wrote an intro for the trade). It is possible that Grant Morrison also wrote the script for the video considering that it is an incomprehensible hot mess. It's been so long since MTV has shown videos on a regular basis, I think people have forgotten how to make good ones. I'd rather see Way working on a new comic.
Batwoman 0 will be released November 24th. Not really a headscratcher, but I thought I'd throw it in here because I can't freaking wait for this book to come out. Stupid delays from the other 27 Batman titles pushed back the release of this book, which is perturbing to say the least. No doubt it will be worth the wait!
Our Valued Customers is a pretty amazing blog, especially for anyone who has ever worked in a comic book store / visits one on a weekly basis. (Seen on Comics Alliance)
That's all I've got for now folks. Stay tuned as the barrage of end of year posts begin, and boy does this year deserve a lot of reflection....
$2.99 $3.99 Batwoman comic news dc grant morrison headlines marvel my chemcial romance retail The Umbrella Academy