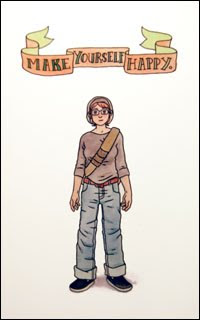 Chicago winters are a very resilient disease. All of the symptoms disappear and then BAM; you have an outbreak of blustery wind and freezing rain. It is nice to have more excuses to stay inside and read comics on a Friday night, and also make chai tea from a recipe found in a graphic novel. That narrows down the list of books right away, but in this case the recipe is from fellow Chi-town resident Lucy Knisley's collection Make Yourself Happy. If you aren't familiar with this up and coming writer / artist, you can check out her webcomic series titled Stop Paying Attention. She also contributed to Marvel's recent Girl Comics anthology (her story is in the first issue and features an adorable Doc Oc). I first became familiar with Knisley's work when she chronicled her attempt at a cleansing diet in "The Fast" which was linked on BoingBoing, and it's also collected in Make Yourself Happy. Her numerous nerdy references and self-deprecating humor make her work immediately engaging, but she conveys real life experiences with a sincerity that gives these mini-comics a longer lasting impression than your average webcomic series. A benefit of autobiographical work is that the wide range of subjects means there is something to which everyone can relate. You may come to her site and find a study of skate-rink patrons or a revealing account of a recent break-up. I immediately jumped on the chance to own a hardcopy of her work even if much of it is available online. This is  something I can hand to a friend or take on the train, not to mention buying this collection supports an artist that frequently provides their content for free. If you're in the Chicago area, you can pick up her books at many local establishments, including Quimby's, Third Coast Comics, and Challengers Comics + Conversation, or order directly through her website. She's definitely a "next big thing" creator, so check out her work sooner rather than later! Here's the chai tea syrup recipe found in the back of Make Yourself Happy, though Lucy's instructions and illustrations give it a lot more character:

I suggest going to a nice large grocery store to gather all of these ingredients. I went to no less than three places to get everything. The Edgewater farmer's market did not have all of the spices (ground cloves are hard to find!), and I started making it and realized I'd forgot the most common spice of the bunch, cinnamon. Luckily the local grocery / liquor store had it in stock.

Bring 3 cups of water to a boil in a medium size saucepan. Steep the three bags of tea for several minutes while stirring, then add all of the dry ingredients (this is everything except the vanilla and honey). Add the honey to taste; Lucy's notorious sweet tooth recommended 5 tbsp. Stir constantly for 20-30 minutes until it gets thick and syrup-like. She uses a wooden spoon, but I went with my teflon spatula. Turn off the heat and remove the tea bags and bay leaf. Add the vanilla. Let cool, then store in a glass bottle or jar to store in the fridge for later. Add to milk or soy milk to taste, and enjoy it hot or cold. I may have let mine boil a bit too long because my syrup was hardly enough to fill half of a glass jar, but it still turned out delicious! Next time I may add some peppercorns to the mix to give it a spicier taste. Lucy also includes a summer pickle recipe that I will surely be trying out once I get my hands on some fresh cucumbers.
Chai tea recipe challengers comics Lucy Knisley Make Yourself Happy Nerds in the Kitchen quimby's Stop Paying Attention third coast comics web-comic