Hopes and Fears for the DC Relaunch

June 12, 2011
Since news broke on June 2nd of DC's plans to relaunch their entire line of titles come September, it's clear that there won't be another comic book news story quite like this one for the rest of the year, and perhaps for years to come. Though countless speculation, opinions, rants, and other varied thoughts already exist on the internet concerning this huge announcement, I wouldn't be much of a comic book blogger if I didn't put in my two cents! If you don't follow comic news too closely and need more details, there is a great rundown of all of the title announcements here.

-People are talking about the relaunch / comics in general. Before I get into any of the anticipated titles, it's exciting to see a story like this getting attention. Fans are discussing it in shops, non-comic book related websites are covering it, it's getting some genuine buzz. Whether this will bring anyone into shops off the streets is yet to be seen, but here's hoping this bold move from DC will motivate curious fans and former fans alike.

-Batwoman will FINALLY be released. All of those vague reasons for delaying the book now make sense. "When the market is more favorable for a #1 release" has a whole new meaning. However, it is going to be interesting to see how the title will fit into the relaunch considering everything else is "starting over" and Batwoman's book continues from her stint in Detective, but I guess we'll find out. I am just damn happy to finally see this book released.

-Brian Azzarello and Cliff Chiang to take on Wonder Woman. Oh man oh man, am I excited for this book. I love me some Chiang artwork, I thoroughly enjoyed Azarello's 100 Bullets, and it's refreshing to see DC put some more offbeat creators on this title. I myself have had little interest in reading Wonder Woman, especially when they do shit like turn here into a 22 year old who wears Lisa Turtle throwaways. In the first promo image for WW #1, Chiang even manages to make her new costume work by simplifying Jim Lee's overly busy design (Jackets! Chokers! Bangles! Pants! More more more!). Azzarello, known best for his hard-boiled noir stories, is not an obvious choice for this title, which could make it a really fresh take on the character or...something else. Either way I'm excited to find out.

-Justice League Dark. Need I say more? Okay. So all of this character licensing re-shifting DC has been doing with Vertigo totally makes sense now. Why didn't we see this coming? John Constantine and Madame Xanadu on the same occult themed Justice League team? Yes, please. Also, now that I've seen a few covers from Milligan's original take on Shade the Changing Man, I'm definitely interested in checking out more books about this character. Mikel Janin will be the artist, and though I am not familiar with his work but I'd imagine his pairing with Peter Milligan implies he may have an alternative style. Also good to keep in mind that the last team books Milligan wrote were X-Focre and X-Statics for Marvel.

-Red Lanterns to have their own title. This is another Peter Milligan book to which I am looking forward. Anyone that read Blackest Night and the preceding stories of Atrocitus and his Red Lantern Corps have been hoping for this book. I forsee a lot of blood spattered splash pages. Also, this may be the only corps with a cat lantern (makes sense).

-Action Comics written by Grant Morrison. Three words sum up my excitement for this book. All. Star. Superman. Morrison clearly has a lot of respect for the character, and I'm excited to see what new in-continuity stories he will tell with Supes. Even though it is not part of the initial releases in September, DC has also stated that Morrison's Batman Inc. will continue but the release won't happen in September. Rumor has it Chris Burnham will be the regular artist once the series relaunches at #1. Did you really DC would sign him as an exclusive artist and not utilize his talent?

-Very vocal fans are PISSED. Understandably, there is a group of fans that feel alienated by the announced relaunch. DC has repeatedly stated their desire to bring in new fans to the books, and that makes current fans feel a little jilted. I am not one of those fans myself; in fact, I'm totally okay with DC courting as many readers as possible. Current readers are fickle and small in numbers. Sorry, but we need more readers, even if it means pissing off a few of the current "loyal" readers. What seems most outlandish is the repeated mantra that current and past stories "won't matter" once the universe is relaunched. I can't understand the absurd notion that new stories make old ones irrelevant. The idea of the relaunch is to create new views of classic characters. Without being influenced or informed by previous stories, there would be nothing to re-make, it would just be creating new characters. It's also worth mentioning that the past 80 years of stories can still be enjoyed by readers new and old. Last time I checked, DC wasn't going to stop printing their back catalogue.

-A lot of books being released I still don't care about. But I guess that will always be the case. I'm still planning to pick up more DC titles than I currently read, which makes it a win if enough readers feels the same way.

-Jim Lee re-designing all major character costumes. This particular part of the announcement had me cringe. I think Jim Lee is a very talented artist that hasn't really pushed himself to new levels in a long time. On All-Star Batman, the critically lauded Frank Miller book, Lee's work felt lazy and overly familiar. Much of the imagery seemed like recycled designs from Batman Hush. More troubling, his recent re-design of the Wonder Woman costume was almost comically outdated.  His Justice League #1 cover is a little too Michael Turner inspired for my taste, and I doubt his interiors will be much of anything new. The relaunch is meant to entice new readers, but those new readers better like early to mid 90's artwork cause there's a whole lot of it. Even Rob Leifeld has a book!

-True relaunch or just an over-hyped renumber? Until the books show dynamic and engaging new takes on the classic characters, it could prove to be more of the same thing. They've shifted around a lot of artists and writers, but for the most part September sees the same creators working in the DCU as we have now. Considering the stakes, I am hoping artists and writers will rise to the occasion and bring their best work forward.

-Retailers are nervous. It is hard enough trying to gauge the anticipation of a new book, let alone 52 new titles in one month. Speculators tend to pick up number ones in hopes that it will become highly sought after (yes, these people do exist), and it is a good jumping on point, but never have so many new books come out at once. Will only the bigger books garner a lot of attention? Will the numbers for DC remain soft compared to Marvel's hefty market share? All books for the relaunch are returnable, but that initial cost for ordering will come from the store owners, and credit for returns isn't instant. This is a big gamble that DC is taking and expecting comic shops to make it with them.

-Can DC survive if this fails? If fans don't buy these books en masse, it could be catastrophic for the nearly 80 year old company. Of course, much like the launch of "New Coke", the triumphant return of the "Classic" could be more profitable than the initial relaunch. However, comic book readers seem a little less forgiving than soda drinkers and may not return if their favorites are changed too drastically.


The As Yet To Be Seen

-Same Day Digital Releases For All DC Titles. DC is hoping this will entice readers to try more titles, but retailers fear they will pick up digital copies rather than buy books in store, which is a valid concern. Publishers really do need to do this if they want to seriously combat pirating. I don't think anyone that currently pays for comics now would go all digital just because it's suddenly an option. I would think that the most DC has to gain from digital comics are people who currently don't buy comics or trades because they don't want to "collect" but simply want to read (think people who travel for a living). Overseas readers that pay top dollar for imported books will benefit from this option as well. Until they actually target these customers, retailers will continue to accuse publishers like DC of poaching the already loyal weekly readers that frequent their stores. As stated in my musings on the industry earlier this week, anything that makes comics more accessible is okay by me. 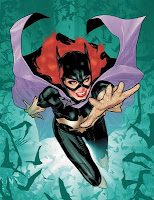 -Barbara Gordon to return as Batgirl. More than any other title, this announcement has garnered the most attention by far. (When Fangirls Attack has a very comprehensive list of the fan reactions to the return of Batgirl.)It is an unsurprisingly controversial decision, as many have come to love Barbara's current role as Oracle. Nearly my whole life Barbara has been in a wheelchair. For many in the differently-abled community that have come to look at Oracle as one of the few positive role models in comics, or pop culture in general, this is a hard change to accept. The creative team they have behind the title, Gail Simone as writer and Ardian Syaf as artist make this a must read, but I can understand why so many are hurt and may pass up on the book altogether. One twitter user summed up my feelings pretty well when he said in so many words that anything done to change the character of Barbara Gordon can't be any worse than what was done to her in The Killing Joke. Couldn't agree more, and any feelings about this huge change go back to my comments on fans that are pre-emptively condemning DC's decision to relaunch. Any new stories told of Barbara as Batgirl do not change the ability to enjoy and find inspiration in the stories of Oracle from the last 20 years. More than any other book, DC will have to prove to fans this change is worth making.

-Will this really bring in new readers? We will find out come September, but I really hope this works in everyone's favor. DC is not too savvy on reaching out to younger readers, as evidenced by the decision to exclusively break the news via USA Today, but the story is getting attention. I just hope DC has more planned to get the word out to potential readers.

-Overall, I am more excited than I am skeptical. Let's get one thing straight, there is no way that all of these books will be worth reading. There aren't 52 creative teams amongst the entire stable of living artists and writers that would make that possible. But this is still an attempt at some much needed change, and that's something I can get behind. I've never heard the same topic discussed so heavily amongst fans, so thoroughly covered or dissected. Expect to see my opinions here on the new books come September!
Batgirl Batwoman comics dc relaunch retail