July 27, 2011
Retailer exclusive variants are nothing new to collectors, but for fans with love for their local comic shop, Amazing Spider-Man 666 will a be a must-have issue for their collection. Spidey is shown on the cover holding the Daily Bugle with a headline touting the rescue of your LCS by everyone's favorite webslinger. Because these variants required a large minimum order, not every store was able or willing to participate. But here in Chicago, four stores decided to order the incentive covers, and I was lucky enough to have my photography grace the covers of two. Considering only about 200 stores worldwide will have this incentive cover (see Marvel's master list), I feel honored to have my work on these covers. A special thanks is necessary to both Challengers and Graham Crackers for entrusting me with the task of representing their unique stores. They could have taken their own photo, hired a different photographer, or just used a store logo, but they thought of me first and I am thankful. Check out the final covers below and order your copies today by clicking the links - they'll go fast! 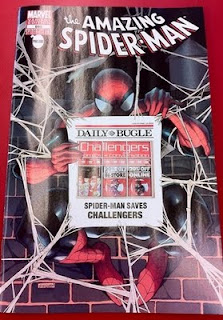 Pat and Dal requested an image of Challengers from the outside, keeping the focus on their unique storefront design. It is worth noting that the selected image did have some post production work completed by artist Luke Smarto since all non-Marvel characters / advertising had to be removed. His photoshop skills are almost as good as his comic book art, but not quite. 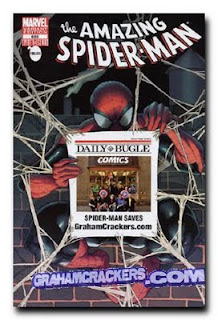 Since Graham Crackers is a chain, the owners felt the best way to represent the stores as a whole would be to have all of the managers on the cover in front of one store, in this case the location in downtown Chicago. Surprisingly, it took serious convincing to get 9 comic book store managers to pose with Captain America shields and a Thor hammer.

Again, order directly through their websites or go to the stores to get your copies soon. Lots of fans are trying to collect as many covers as possible!
amazing spider-man 666 Chicago chicagoland photography variant cover