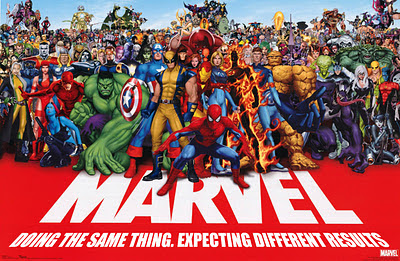 It has been widely speculated how Marvel would respond to DC's New 52, especially with DC dominating media attention and market share in the last three months. Would they do a "revamp" of their line as well? Would they try to use their new parent company to gain a wider audience? Would they keep calm and carry on? We may now have our answer with recent announcements that Marvel is canceling several of their lowest selling series, yet offering just as many issues as last year.  Instead of offering a wider variety of titles to appeal to more readers, Marvel's (continued) strategy will focus on "double shipping" their flagship character titles each month, forcing loyal customers to spend more and make up for Marvel's loss in short term sales.
As of late, I've found it hard to find the time to write about comics. I have been reading plenty, but few subjects seemed pressing enough to motivate me to make the time to voice my opinion. The month of October I failed to make Halloween costume suggestions or spooky reading recommendations, and come November, my lack of writing had become habit. It's unfortunate, but this recent change was the motivation I needed to get back on schedule and talk comics. I just wish it was something fantastically positive rather than a shitty marketing change that has me talking.
The (un)official announcements were made several weeks ago, but now with February's solicitations set, it is confirmed that X-23, Ghost Rider, Daken: Dark Wolverine and Black Panther: The Man Without Fear have all been canceled. PunisherMAX will also be "ending" as opposed to getting canceled. Marvel has no official press release regarding these cancellations and most fans found out following sad tweets from the book's creators. I'm assuming Marvel failed to bring attention to these cancellations  because the headline would read something like this:
"Marvel to Cancel Female / Black / Bisexual Superhero Titles"
That's one way to read the news, right? X-23 and Ghost Rider are the only current ongoing female headlined superhero titles. Daken is the only headlining character that could be described as "not entirely straight", and Black Panther certainly isn't the only black character, but he's only one of two with his own title (Miles Morales has very recently joined those ranks). So for those keeping score, of Marvel's solo superhero titles to be released after the cancellation of these titles:
18 = White Male Dudes
0 = Women
1 = Minority (and even that title, Ultimate Spider-Man, won't see a release in the month of February)
Marvel does have three titles headlined by female characters, but none of them are in the capes crowd with Dorothy and the Wizard in Oz, Anita Blake: Circus of the Damned - The Scoundrel, and Northanger Abbey. I guess Marvel does have a place for female characters, and that's in the adaptations of other works. The majority of Marvel's titles are team books / minis (they add up to around 20 releases for February), and female and minority characters do show up in these, but with the almost always guaranteed white straight male majority.
Two observations here: one, this doesn't reflect the real world. Two, this doesn't even reflect the readership. Instead of doing something risky like, I don't know, investing advertising and making it a priority to increase readership for these lesser-read titles, Marvel has made it clear that they are abandoning the readers on their fringe. The ones that look at the shelves in the comic book store and don't see themselves reflected on the covers of these books. The sales don't lie, they should cater to the loyal throngs of readers picking up three different ongoing Captain America titles, right? If short term sales are their only goal then yes, Marvel is doing exactly what they should. Trimming the fat and making a leaner line of books that produce more of "what sells" would seem smart, only they don't have anything to gain. This is all about maintaining the status quo, not expanding readership. Much of what I am saying could also refer to the "New 52" as DC has not shied away from stating that males age 12-30 are their target audience (not sure who else would buy Catwoman these days), but hey at least they have something to offer me as a reader with Wonder Woman, Batgirl, and Batwoman. I happen to like male superheroes, too, but the comic book market is not in short order of readers like me. I already buy what they are making. If Marvel and DC have any hopes for the long term health of the market, they have to start making comics that appeal to the people that aren't buying their books already instead of trying to get their current readers to buy more, or bringing in "lapsed" readers.  Creating books featuring more females, minorities, and just plain different characters is a start. Until then, Marvel is just reinforcing the view that heroes may come in all shapes, sizes, colors, or creeds, but they are only interested in telling the stories of one kind of hero.
cancellations comic market Daken: Dark Wolverine dc Ghost Rider marvel minorities in comics PunisherMAX rant women in comics X-23