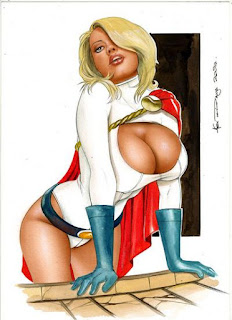 Molly is a cosplayer. Molly needs your help buying herself new, bigger breasts. I think I'd like to help Molly another way by offering an alternate solution: quit cosplaying.

This may seem like an extreme solution, but it is as logical as buying a new pair of boobs. When looking at Molly's plea for donations to cover the cost of the procedure, several contradictions present themselves. "...I feel more secure and certain of my place in the world than I ever have before. That’s why I am able to finally come out and say this publicly: I want fake boobs." Acceptance of one's body is not usually followed by feelings of inadequacy, unless one is inclined to accept feeling dissatisfied. It is probably painfully obvious to everyone but Molly that this is most definitely a matter of self esteem. Accepting one's body is a lifelong battle for most women, one that rarely ends in total happiness with one's physique. There is no greater voice or opinion more frequently heard than the one in our own head. I believe her when she says she isn't doing this for anyone else; besides an encounter with a fairly biased casting director, I doubt many people have told her how she needs bigger breasts. And I'm certain no one has told her she needs bigger breasts to feel better about herself. That strongly held belief belongs solely to the person convincing themselves of the unnecessary procedure.

Everything from the depiction of women in comics to coveting her own mother's figure are named as contributing factors to her dissatisfaction. Strangely missing from her history with her body is cosplay. Where is the passage discussing the positive influence of cosplaying? The feeling of confidence when one embodies their fictional heroes, the sense of accomplishment when creating an accurate and admired creation? My theory is that these sentiments are missing because they aren't felt, or may be overshadowed by feelings of inadequacy. The very essence of cosplay is in creating illusion, bringing to life something that only exists in fantasy. But no one can create the grotesquely disproportionate drawings of Humberto Ramos. Powergirl's breasts are physically impossible. The broke back pose cannot be reproduced in real life. Is failing to live up to the unrealistic standard of these depictions effecting Molly's decision? I'd guess the answer would be yes. But this conundrum is not one shared by all cosplayers. I cannot speak for others, but in my experience, cosplaying can be a deeply rewarding ritual that is a unique way to share one's passion for a character or creation. It can boost one's confidence as well, in a way that only dressing as a warrior goddess can. When cosplay has the opposite effect it may be in the participant's best interests to not do it, and in Molly's case, I think she may be doing more damage to her self-esteem than good. At least that is the impression one gets by her lack of positive association.

Molly takes a lighthearted approach to the subject of breast augmentation; she refers to it as her "Betterment Fund", adding a "boobs" category to her blog subjects, referring to herself as being part of the "itty bitty titty committee".  This tells me she may not be taking the subject as seriously as it deserves. Where is the research? Has she picked a doctor? Looked into the risks? Read countless testimonials from those that have gone under the knife? An afternoon spent reading through GoodbyeImplants.com may better inform Molly's decision. Hearing feedback from readers and other cosplayers encouraging her to accept her body may also effect her final decision. Being reminded that she is contributing to the greater societal problem all women face concerning body image by making this very public plea may make her think twice about taking donations. By rewarding contributers with the ability to choose her cosplay costumes post surgery, she's essentially giving up control of her own body. In so many words, "give me money so you can dress me up." There are a lot of girls out there like you, Molly. Some of them are still young, still anticipating the day when they will grow up to look like that ridiculous anime character they've drawn. Do you want to go to conventions with your newly augmented body showing her one more unrealistic depiction? Why not continue to cosplay as you are now, showing that girl what real confidence looks like? Showing others that no, you may not have breasts that look inflatable, but you still look and feel good anyway? I can promise Molly she'll be better for it and she'll have nothing to regret if she does. If you are reading this, I hope you will tell her, too.