March 17, 2013
Let's get the obvious out of the way. I have neglected to write about comics lately. One only need look at my "recent posts" to notice that they are in fact, not that recent. There was no year end wrap up,  no best of 2012 list, and there is a serious lack of praise for books like Hawkeye and Mind MGMT (these titles deserve multiple posts of devotion). What has been taking up my leisure time? Why the ravenous consumption of other media! Specifically Game of Thrones. 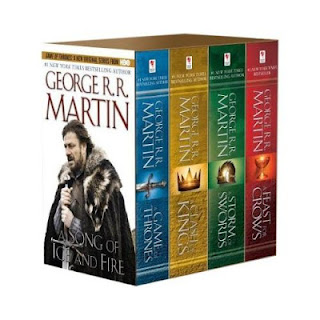 Game. Of. Thrones. Now, the holidays are not an unusual time for a fan to fall behind on reading. Family engagements, holiday parities, gift shopping, and generally managing one's sanity before the passing of New Years can overtake favorite pasttimes like reading and blogging about comics. But what turned this seasonal absence into prolonged sabbatical was the receipt of one gift: the four book boxset of George R. R. Martin's series A Song of Ice and Fire (seen above). It's a good thing I became a comic book fan; my lack of self control could have led to far more destructive habits. But just because comics are my chosen addiction doesn't mean they can't be neglected by other obsessions. GoT took my comic loving heart and ran. The ever expanding cast of morally ambiguous characters that inhabit the world of Westoros left little room for else.

As I near the end of book four and complete watching season two of the HBO series, my pace has finally slowed enough to allow me to begin catch up on the last few months accumulation of comics. I'm not quite there, but this week I'm now current on several of my favorite titles: Saga, Hawkeye, Locke & Key, The Walking Dead, and the Buffyverse books. That still leaves me behind on quite a few titles, including (shamefully) Hellboy In Hell, Mind MGMT, Wonder Woman, Morning Glories, and many more.

I've missed reading comics, especially the community aspect I enjoy as a reader and blogger. Whether tweeting my thoughts, writing a review, or chatting about it with friends at the comic shop, I rarely read comic books in a vacuum. I can't wait to resume this shared enjoyment, and hopefully discover my next all consuming media. Maybe this time it will be a comic.

Next: Game of Thrones wasn't my only time suck these last few months. Instead of reading comics, I've also been contributing to creating one. More on Ladies' Night Anthology coming soon!
blogging game of thrones gifts holidays ladies night