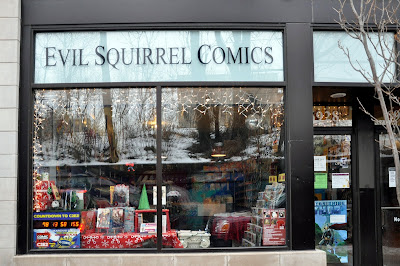 Evil Squirrel Comics is another shop here on the North side of Chicago, and it is one I've been curious about for several months. I work in Evanston, so everyday on my way to and from work, I see this store from the Redline. It's located just next to the train tracks, and it's nestled in between an independent theater and a greasy spoon diner. I found the area was even more charming in person than it looked from high on the L train. Across from the storefronts are large, vibrant murals that extend the length of the street and wrap around to the Morse train station. The character of the neighborhood extends to the inside of the store as well. The first thing I noticed was how pleasantly it smelled, which is unfortunately rare in the world of comics. I think they still had some holiday scented oils or candles, and festive decorations were still hung throughout the store. This gave it a very cosy feeling; that and the fact that you can see the entire store from the minute you step in the door. There are no hidden nooks, corners, or high shelves to lurk around. It's pretty much you to the register, and comics in between. Luckily the high ceilings made it feel more open than cramped. Evil Squirrel has a lot of unique aspects, most notably their shelves are not on slot wall, nor are they wire wracks. It's a very sleek setup of long metal shelves giving the space an organized and uncluttered feel. The bagged and boarded books are not separated by publishers but are instead organized alphabetically; except the indie and kids titles. Sort of a "Super Heroes" and "Everything Else" system. They even had some warnings next to titles unsuitable for children. I can imagine that would be appreciated by parents that may bring in their children to shop. My only complaint about the visually appealing display system is that the top shelf where new books happen to be kept is not exactly eye level for a person of my stature. They could easily mix the new titles in with the rest and use magnets on the metal shelves for "New This Week" signs. Then again, I have no idea what would be the average height of a comic book fan.

One of the many things that pleasantly surprised me was the wide selection of back issues. For such a small store, they have used their space  economically and they have about 30 long boxes of comics sitting front and center. Not only that, but you can buy the "Superhero Back Issues" for $3 per pound. Since the average comic book only weighs a few ounces, you can really get some deals with this system. They have a pretty good mixture of old and new titles, too, so don't think it's all $.50 books. I probably would have spent more time browsing if the boxes were a little looser; some were too tight to even get a finger in. But since this project tempts me to buy a lot of things it's probably best that I avoided the bargain back issues. (When I go back to being a regular old consumer, I'll be sure to take advantage of the deals.)
Enough of my subtle observations; I did eventually talk to the staff member working that day. He did not wish to be identified for the blog, and I can respect anyone's wishes to avoid having their picture / name posted online. I will say he was very friendly and extremely modest about his comic book knowledge. Thursday's are the store's Magic tournament nights, and he said that was more of his speciality, but all of my questions about the store and books were answered patiently and thoroughly. At one point I asked about the contents of the Buffy Tales HC and when he couldn't find the answer online he called the owner of the store himself (keep in mind that he did this before he knew I was writing a blog about the store). I considered his thoroughness above and beyond necessity, and it was definitely appreciated. Since I can't visit every store in Chicago on Wednesday, there will be plenty of shops like Evil Squirrel where I won't get to meet the owners. But this project is all about meeting the people behind the counters, and that is simply up to chance.
In addition to the newer comics and back issues, they have a small selection of toys, t-shirts, and novelty items. They feel carefully selected, as if to say, "If you don't buy this, we'll still like the way it looks in the store." In other words, they don't appear to be selling items they wouldn't like themselves. That may seem like an obvious observation, but the wide selection of stores in this city allows shops to cater to specific customers instead of appealing to everyone. Continuing with the store's offerings, there are several original pieces of artwork for sale with the prices clearly displayed. This gesture must be appreciated by artists and customers alike since it can be awkward to ask. Little details like that are what make this store special. Decisions have been made for the space to be practical and visually pleasing. I appreciated the aesthetics in this small shop, but didn't feel overwhelmed by the selection. If the way Evil Squirrel looks doesn't appeal to you, then the products within may not be to your liking. But honestly, who doesn't enjoy over-sized inflatable die? Evil Squirrel earns my seal of approval, and I will definitely be returning, especially when I have a hankering for back issues and cheap diner food. 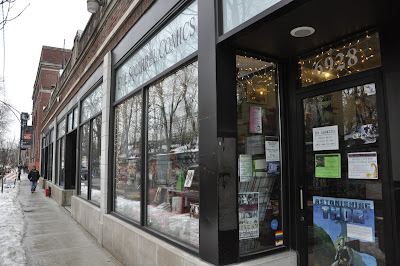