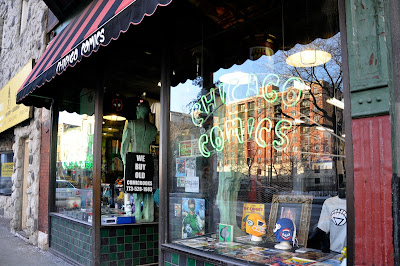 I can still remember my first trip to Chicago Comics when I was a teenager visiting from the suburbs of Dayton, Ohio. This was not your small town comic book store. I was blown away by the many remarkable items on display; kitschy collectibles adorned with pulp pin ups, patches and pins, art books I'd never seen before, comics I'd never heard of at that point. My wonderment was soon accompanied by considerable feelings of inadequacy. I was 16, reading far too many X-Men titles, and surrounded by a whole world of comics I had not known to exist. I'd like to think I'm a little more informed about comic books nowadays thanks in part to stores like Chicago Comics, but my awe and intimidation still exist when I visit this store.
Chicago Comics is only number five on my list for retail therapy, but I'm certain few stores will be able to rival their selection for independent works. The self published section is impressively large, but they go the extra step by having additional sections for Zines and Minis, too. Well known independent creators have their own shelves like Jason, R. Crumb, and Harvey Pekar. The area dedicated to independently created work is large enough to be its own store. The rest of Chicago Comics attempts to be similarly organized, but some sections aren't as successful. For instance, the area of the store where new individual issues are displayed is a little hard to navigate. There is the "Vertigo" section and the "Superhero" section. I think the store got to a point where they decided to change the Vertigo section to just Independent but forgot to change the sign.  You'll find Dark Horse, Image, and IDW along the Vertigo wall, but you'll also see Buffy and Invincible under the Superhero banner. If they want to organize by genre it would help if they had more than one. To add another confusing element to the mix, they put the trades on the same walls as the comics, too. But not all of the trades, just the independent ones. The superhero trades are alphabetized on separate book shelves instead. If they could apply the same clarity to the mainstream comics as they do to the self published section, it would greatly benefit confused shoppers. To be fair, I did not so harshly criticize Evil Squirrel for having a similar system. Because they do not explicitly label any section by genre, you are left to assume rather than debate their organizational choices. They also don't offer near as many indie titles as Chicago Comics, leaving less opportunity for confusion. 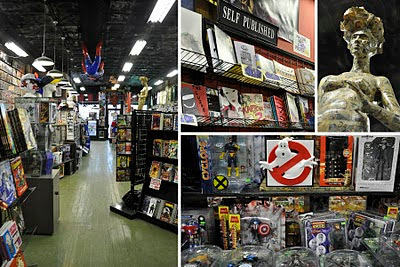 It's obvious that Chicago Comics doesn't do much in small quantities. They have an abundance of toys, t-shirts (for men and women, thank you), magazines, mangas, kid's books, and even hard to find specialty DVD's. The back issues may be easy to miss, but only because they are stored in attractive black drawers in the back of the store rather than your usual tattered cardboard boxes. If you happen to come into the store on a slow Wednesday, it's dangerously easy to find other items to replace your comic book budget. The Star Trek flask was particularly tempting during my visit. No matter when you come into the store, expect the shopping experience to be a self guided tour. The staff here is not particularly warm, but for shoppers that like to avoid small-talk at all costs, it can be a blessing. The check out counter is raised just a foot above ground level, but it's enough to create a disconnect with the employees. In all of my visits throughout the years I have never seen an employee on the floor of the store (unless they have an automated restocking system, then they have to come out from behind that counter eventually). My interactions with employees have always been polite, but I feel like I'm usually doing most of the talking. Raphael, one of the store employees I spoke with on Wednesday, was happy enough to answer my questions and he even posed for a photo next to his recommended title, Morning Glories. This encounter was probably the longest I have ever spoken to anyone at Chicago Comics.
The store's unofficial mascot is a female mannequin deco-paged with yellow discarded comics, a goddess that has stepped out from between the pages of the funnies. She's perched high above everyone in the store, with toys strewn at her feet like offerings (actually she's just put on the same table where figures are displayed). It's a fitting representative for the store's atmosphere. She's strange, beautiful, exotic, and imposing. Much like the store, she can be a little scary to approach, but then again, isn't that the power of fascination, of allure? Chicago Comics has these in spades, and I recommend this store for those who don't mind asking for what they want. The mistress of Chicago Comics is definitely high maintenance.