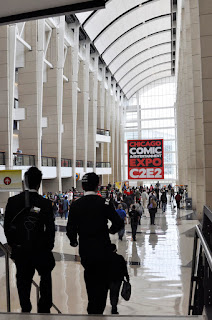 8-16-12 UPDATE: Via their twitter, C2E2 organizers have confirmed that they are in fact keeping next year's show at McCormick (hears collective sigh of relief from fans).

Consider this story as seen through the lens of speculation, but several retailers at this past weekend's Chicago Comic Con (at Rosemont) were questioned by organizers of C2E2 concerning their convention location preferences. When it comes to feedback, C2E2 organizers Reed Pop are known for maintaining an open dialog with retailers, fans, and exhibitors. The McCormick convention center has been equally praised and derided by fans, and it is perhaps one of the only aspects of the show to be continually mentioned as a complaint. Hands down, Rosemont is more conveniently located to public transportation and has far more hotels considering the vicinity of the large O'Hare airport. But if you ask anyone attending C2E2 or Wizard World's Chicago Comic Con, convenience aside I would bet most would tell you McCormick is a far more attractive exhibition space than the older Rosemont. Personally, I would be disappointed to see C2E2 change spaces, especially if they moved to Rosemont, a space so heavily associated with the Wizard World of past. Despite the vastly different programming and guest lists, casual comic book fans still have a hard time distinguishing between the two conventions. Whether this loose polling of Chicago Comic Con attendees was an attempt to gauge the crowd for what attracts them to each of the shows or whether they are considering changing locations is yet to be seen. Either way, Reed Pop clearly wants to put on the best show possible and they are always open to listening to fans. If you feel strongly one way or the either, share your opinions with them via their Twitter or Facebook pages.
c2e2 comic book convention convention conventions rumors