Chicago Comic Con 2012: Cons, They Are A Changing 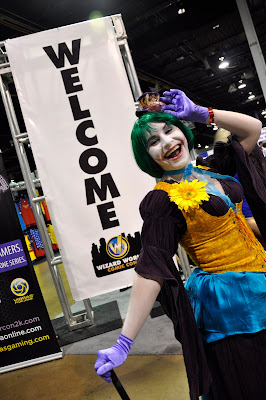 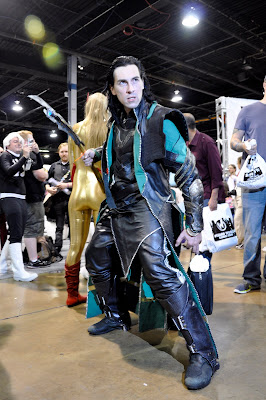 Every year comic con gets bigger. The lines get longer, the guest list fills with more celebrities, the ticket prices go up, and a vocal group of fans are sure to lament how much it has changed. No, I'm not talking about International Comic Con, the show co-opted by Hollywood and universally lauded for being too big and too different from its previous incarnations. The comic con brand continues to be more about spectacle and less about comics, and that is as true of the Chicago show as San Diego. Despite it embracing the mainstream, San Diego remains the go-to convention for comic readers and creators. But with a complete absence of any comic book publishers on the con floor, Wizard World's  Chicago Comic Con has become less relevant to the comic book community. It is not the same show it was 10 years ago (or even 5), but it is still a fun undertaking for fans that know what to expect of it. 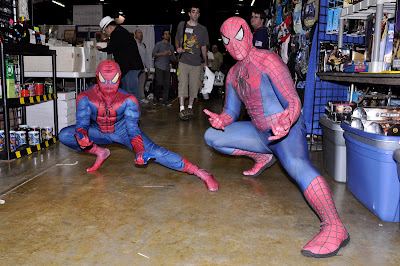 The big draw this year was no doubt the impressively large amount of celebrity guests. The longest lines were for wrestlers like John Cena and CM Punk, comic book legend Stan Lee, and actor / convention favorite William Shatner. Other big names included Tom Felton of Harry Potter fame, Scott Bakula, and Bruce Campbell. With such a large focus on the television and film stars, the cancellations were more noticeable. Vampire Diaries actors Nina Dobrev and Paul Wesley were both no shows due to a change in their filming schedule; Kate Mulgrew's cancellation made the gathering of Star Trek captains less of an accomplishment; and Hayden Panettiere also found her filming schedule in conflict with the show. It is safe to say very few fans were sad to see that Mike "The Situation" Sorrentino was unable to attend the convention (the very announcement of him as a guest served as more of a deterrent than incentive). Not all of the long lines were for actors; comic book legends George Perez and Neal Adams had impressively large crowds queuing for sketches and signatures, as did Batman artist Greg Capullo. Whether fans came for the comics or the stars, the show was bustling even during Thursday's preview night and was pushing maximum capacity during its height on Saturday. The newer layout received equal amounts of praise and complaints. Having the celebrity signing area in the middle made more sense from years past when they were right in the front creating an immediate traffic jam upon entering the con floor; but booth numbering was difficult to navigate, with some vendors being shuffled around at the last minute. Very few creators in artist alley had positive sentiments to express about their experience. From the labyrinthian-like layout, last minute changes, and sometimes non-consecutive table numbering, many expressed feeling like they were given a poor position on the floor. Stretching against the back wall from one end of the con to the other, the position of artist alley felt like an afterthought. Lines for signings had no where to go and aisles were not consistently wide enough to navigate. If there is any aspect of the convention that has changed for the worse, it would be the disregard for this important area of the convention. Sadly, the damage may be done at this point since many local creators have vowed never to show at another Wizard World run convention due to past mistreatment. As a con goer and member of the press, I can say that my experiences with the Wizard World staff and volunteers was nothing short of pleasant and it is disappointing to hear that respected professionals cannot say the same. Local creators like Skottie Young, Brian Azzarello, Mike Norton, Jill Thompson, Tim Seeley, and Gene Ha were noticeably absent. Their reasons for not attending can only be left to speculation (or not if you follow some of their twitter feeds), but if you throw a show in a huge comic book town like Chicago, it reflects poorly to have such talented folks skipping your show. 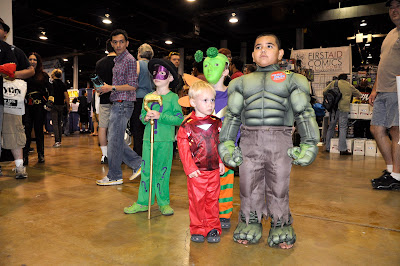 The selection of vendors was varied enough to appeal to just about anyone coming through the doors. There were several apparel vendors, including Threadless, We Love Fine Tee's, and Superhero Stuff (these vendors appealed to men and women equally which was appreciated as well). I myself purchased a Black Widow tee from Superhero Stuff featuring the artwork of Daniel Acuna; since he was in attendance, I brought the shirt for him to sign and he claimed my request made him feel like a rockstar. Despite the many comic shop vendors, no one had a terribly impressive amount of discount trade paperbacks. Anyone that came to the show with a booth of $5 trade paperbacks would have cornered that market. The majority of comic shop vendors tended to lean towards the rare / key book market. This is unsurprising as long established vendors are more likely to commit to coming to show that has proven successful for them in the past (the newer show in town, C2E2 must be a younger vendor's game). Considering that attendance numbers have only gone up over the years, the potential for big sales is hard to resist. 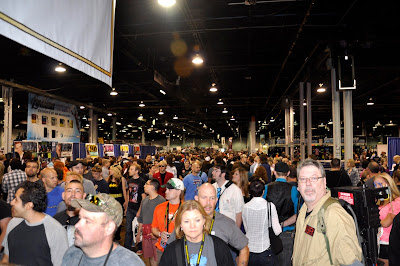 If this was my first Chicago Wizard World, I would have been more impressed by the experience. But knowing of the prestige it once held makes me nostalgic for the past. Chicago's was the first convention I ever attended and to have met John Romita Jr., Frank Miller, and Chris Claremont at the same show seems like an unheard of opportunity today. Back then, the likes of DC, Marvel, and Dark Horse were all in attendance and they hosted those legendary creators and many more. The number of panels on comic books used to be so numerous that it was impossible to attend each and every one; this year out of all of the panels, only 8 featured comic book creators. Attendants of Wizard World 2012 were more likely to have a difficult time managing the photo op schedule than panels. In attending two days of the convention, I also felt like I experienced everything the show had to offer and can't imagine I missed out by not attending all four days. As much fun as I had this weekend ogling the celebrities, buying comics and tees, and appreciating the impressive cos-play, I could not help but miss what once was. The evolution of the show from premiere comic convention to pop culture event is fairly recent and has yet to prove sustainable; the added competition from C2E2 will either make this show continue to differentiate itself by furthering the shift in focus from comics, or Wizard World could still step up their game to compete with the new show and claim its previous status as the second most important comic book convention in the country. Until next year's guest list and programming is announced, here's hoping the first time con goers of this year will have something new in store for them in the future, and something familiar for the rest of us.


After spending two days at the convention, I ended up with quite a few images of cos-players and detail shots. In an effort to share as much of them as possible, I have created a Comic Book Candy Facebook page. This way anyone can more easily share the images by tagging themselves as well. You can find and "like" the page (and images) HERE
Chicago Comic Con comic con comic industry convention conventions cos-playeres cosplay cosplayers