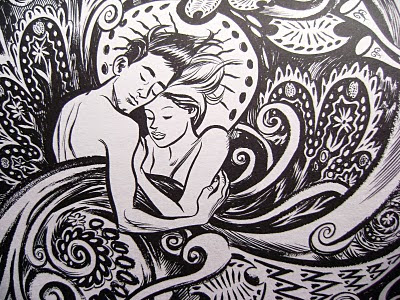 I must confess I’m very proud of the mix I’ve put together for the graphic novel Blankets. An autobiographical novel by Craig Thompson, Blankets is a poignant tale of first love told from the author’s adult perspective. Thompson’s own experiences serve as a reminder to readers that identity has its roots in our early relationships, with siblings, with parents, with God, our first love; and that the heartbreak visited by children may never be fully understood or accepted, but informs the adults we become.

Many of these songs remind me of my own formative years, and more than a few are tinged with the inevitable pain that comes with first love. A few tracks are taken from the characters’ subtlety suggested tastes (you can see Radiohead and Pixies poster in the background of Craig’s girlfriend’s room), while others are inspired by Thompson’s religious upbringings. Lastly, the winter setting of the novel, and the exploration of intimacy through sleep inspired some of the selections. Several songs encompass many of the novel’s themes, evoking feelings of first love, slumber, winter AND religion, making this mix a personal achievement. My original offer still stands; anyone who wants a copy need only ask and provide postage!

Smashing Pumpkins
Song: In the Arms of Sleep
Album: Mellon Collie and the Infinite Sadness

Jens Lekman
Song: A Higher Power
Album: When I Said I Wanted To Be Your Dog

Elliot Smith
Song: Everything Reminds Me Of Her
Album: Figure 8

P.S. - Sorry for the lack of updates lately. Went out of town for a few days and didn't have the good sense to have a "scheduled" post. Many more updates to be seen this week, promises!
blankets craig thomson music playlist