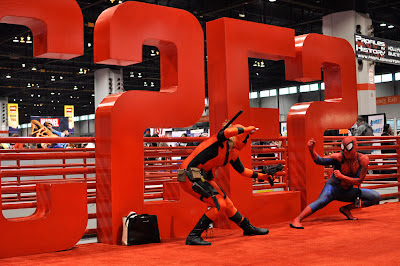 The last day of C2E2 was packed, especially with lots of families. Unlike last year, children aged 12 and under received free entry only on Sunday as opposed to the entire weekend. Lines for sketches from Art Baltazar, Franco, and Katie Cook were wrapped around the corner and filled with young fans for most of the day. Like the rest of the con weekend, I could not do one thing without missing something else of equal appeal. Attending the Chicks Dig Comics panel meant missing the children's costume contest. Considering this panel was probably the highest concentration of talented female creators in one location all weekend (or all con season), it was worth missing the cutest costume contest (but do pass on a link if you find one - I can't find any coverage of this important event from the weekend).
For those that have yet heard of the recently released anthology, Chicks Dig Comics is a collection of essays from comic book creators and journalists. In Carla Speed McNeil's essay, she shares how she entered the industry, while Jill Pantozzi talks about the parallels between her life and Green Lantern lore. The list of talent is impressive and I highly recommend that you encourage your local comic shop to order and stock this book. Several of the contributors were on hand for the panel to discuss their essays, including Jill Thompson, Gail Simone, Amanda Connor, Tara O'Shea and Jennifer Van Meter. Lynn Thomas and Sigrid Ellis, editors of the book, led discussions and fielded questions. The panel opened with each participant sharing something about comics that didn't make it into the book. Amanda Connor confessed to writing herself into Star Wars comics with her best friend in junior high; Jill Thompson professed her love for Jughead (though that's not a surprise for fellow foodie Thompson); Tara O'Shea is tired of seeing erect nipples and camel toe on female superheroes in cover art. Several creators spoke of keeping their passion for comics a secret while growing up, either to avoid the often inevitable challenge from male fans to "prove" one's knowledge of the medium, or because of the perceived unintellectual nature of comic books. The collection of essays focus on the positive influence comic books have had on these creators, so most of the negative experiences were left out. Amanda Connor spoke of one of her early trips to a comic shop where employees gave her a cold reception. In an act of rebellion, she later applied for a job at a new store down the street, and according to Connor they "kicked their (competitor's) ass". Jennifer Van Meter and several other creators agreed, convincing large publishers that girls and women are a large and enthusiastic audience is an uphill battle. Despite current evidence to the contrary, these companies base their content creation and marketing on what has proved successful in their long histories. She has been told flat out that girls don't read comics (cue laughter from panel and room). Independent publishers being smaller and newer can more easily accept common sense and adapt to the demand of audiences. Jill Thompson was quick to encourage everyone to vote with their dollars and choose to support what they want to see in comics, as the market will only respond to what sells. One other topic that brought a lot of shared frustration was the difficulty in finding merchandise for female fans. What is available is often 'girlified' in that it takes on pink hues and hearts, leaves out many character choices, or focuses on the boyfriend angle (One of the worst t-shirt for sale at C2E2? A Batman tee that said "I like guys with cars and money". It has so many levels of insult!). I was glad to hear an audience member point out that a young female fan can more easily find a t-shirt with Supergirl and Batgirl than an age appropriate comic to read. Jill Thompson vowed to offer all of her Scary Godmother tees in children's sizes in the future. She also pointed out that the conversations within the panel focused heavily on the superhero genre and reminded panelists and audience members alike that cape comics are just one of many types of comics. 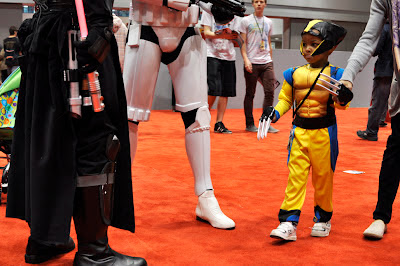 The panel ended a little early since several of the creators needed to leave for signings, and I headed straight to the final Marvel panel of the weekend, Marvel: Next Big Thing. Much like the Cup of Joe panel on Saturday, several announcements were made followed by a Q&A. I was happy to see a large portion of the panel spent on talking about Kelly Sue DeConnick's upcoming Captain Marvel series. Since this book was previously announced, we didn't get to see much of anything new in the way of preview artwork from Dexter Soy, but DeConnick's enthusiasm for the character and her dedication to making this book a success were evident. Issue two of the book will feature a female equivalent of the Howling Commandos called Banshee Squad. DeConnick will also be writing the Captain Marvel crossover with Avenging Spider-Man that will begin in issue nine of that series. Speaking of crossovers, Thor's titles will finally come together in a 9-issue storyline called Everything Burns, beginning in August. Another new title on the horizon includes an ongoing Gambit series written by James Asmus and drawn by Clay Mann. My first reaction to this announcement was that Marvel must be responding to DC's attempt to revive all things 90's. But like the Jim Lee redesigns of the Nu52, there will be plenty of fans clamoring for the creole criminal to have his own book.

Once the Q&A began, several fans lined up quickly, including one Gambit fan that wanted to know if Rogue would show up in the title (James Asmus replied that the complicated ex-girlfriend showing up would only happen at the worst possible moment). Another "when will we see more Runaways" question came up, to which CB Cebulski said they get pitches all the time, but still no announcements on a new book. An X-23 fan sad to see the series end wanted to know where the character will be seen, and Avengers Academy is the place to go for fans of the character. I asked Kelly Sue DeConnick to share how the Captain Marvel series came to be, especially considering the recent lack of female led titles at Marvel. Was it an editorial decision to give Carol Danvers another shot at a solo title? Was she in competition for the book? Turns out she pitched the idea back in 2010 and found support in editor Stephen Wacker. He has been a champion of the book ever since, and he was in fact the one to tell DeConnick that no, she would not be writing a Ms. Marvel book, but rather Captain Marvel. Several other curious fans had questions about the upcoming title as well. One asked if the rivalry between Mystique would be explored. DeConnick said she is a big fan of the character, and will include her in future stories if the book is a success beyond the first arc. Another fan asked about the "son" of Carol Danvers, a villain named Marcus, and (thankfully) there are no immediate plans for including him in future stories. 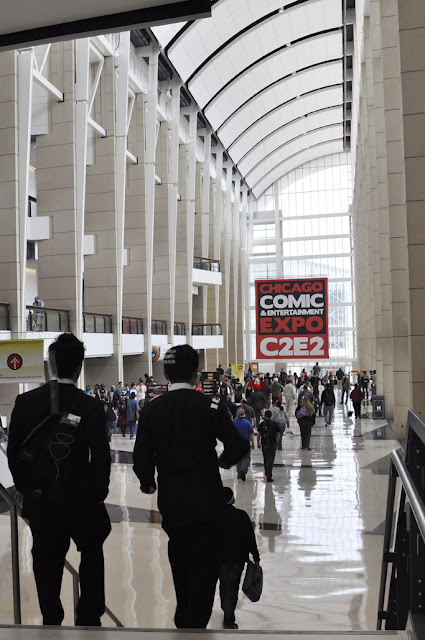 After making one or three more laps of the convention floor, my day and weekend were complete. Five original art pieces, five panels, hundreds of photos, and several five hour energy drinks later and C2E2 2012 came to an end. I will have plenty more to share with readers in my final wrap up post, including many more photos.
Amanda Connor c2e2 Chicago chicagoland Chicks Dig Comics conventions Gail Simone Jill Thompson Kelly Sue DeConnick Tara O'Shea