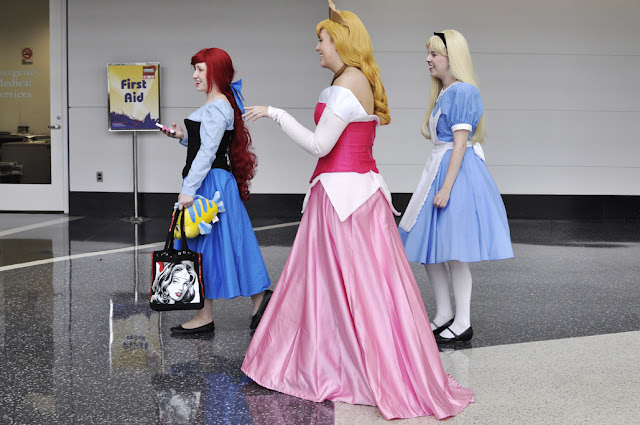 It's been two weeks since Chicago's third C2E2 convention ended, which has given me enough time to decompress, edit photos, and reflect on the show as a whole. Though results may vary, it is safe to say the show was a success. With the official number of 41,000 being thrown around, attendance was up from last year, great news for vendors and organizer Reed Pop. I missed the first year of the show where it was held in a far-too-large space at McCormick, and each year since it has been in a different hall. This  year it had the goldilocks room (not too big, not too small) which allowed the layout a little more breathing room. Aisles were much wider, and though there were still bottlenecks of traffic, it was normal convention congestion and not "they underestimated the crowd" congestion. The organizers provided generous space for celebrity signing lines, and though this made sense for a day like Saturday, it made small lines look extra sad during the rest of the show. It cannot be easy gauging the appeal of television and movie stars, but this system is definitely better than the booths with no physical queues that lead to chaos (see William Shatner at Wizard World, or don't because it's a mess). The big appeal for me as a consumer was hands down the artist alley. Knowing just how costly these booths are for creators, I made sure to put most of my money into this area of the convention. Also, when one has an employee discount for merchandise, it's a lot less tempting to buy t-shirts and books on the con floor. The other big draw as evident in my daily coverage was the large selection of panels. Since I could only be in so many places at once, there were several big announcements from the show that I did not cover first hand, but here are a few books readers may be interested in hearing about:

Dark Horse announced several new series at the show, including Ex Sanguine, a book that can be described as the "anti-Twilight". It is in the same romance vampire genre, but since it follows a relationship between a serial killer and a vampire, there will be a lot more gore and less abstinence alegory. Tim Seeley will be drawing and co-writing the book alongside Josh Emmons and you can look for the new title in October. One title that you shouldn't wait around for is the Juliet Landau penned Drusilla mini series which has been cancelled for various vague reasons. What you can look forward to are two other Buffy tie in books. A Spike mini series written by Victor Gischler and drawn by Paul Lee will be released in August followed in November by a Willow mini written by Jeff Parker and drawn by Brian Ching.

IDW announced that their all-ages Popeye title will be expanded to an ongoing series for the foreseeable future. It is adorable, and you should read it. Other titles IDW spoke of during the Retailer's summit weren't news per se but other things to get excited about are Darwyn Cooke's Parker: The Score coming this June, more artist edition hardcovers like David Mazzuchelli and Frank Miller's Daredevil: Reborn, and the final arc of Locke and Key, Omega, by Joe Hill and Gabriel Rodriguez.

In the future, I would really like to see the smaller publishers show a bigger presence at this convention. Local publishers like Archaia, First Comics, and Valiant were the biggest independent companies with booths, but I would really like to go to a big show in the midwest where Dark Horse, Image, and IDW have as large a presence as Marvel and DC. Though these publishers held panels and spoke during the retailer's summit, it is no substitute for being on the floor all weekend, talking to readers and touting their books and hosting creator signings. Another thing I'd like to see change about this show is all the complaining about McCormick. Yes, it is inconvenient for some, but it is still a million times better than Rosemont. Take the free shuttle from the loop and stop your complaining! Locals seem to be the only people expressing this sentiment, and it's not very constructive criticism.

If you'd like to hear more thoughts and rants alike about this year's C2E2, head over to the Double Page Spread podcast for post-con coverage from host Wendi Freeman, creator Lauren Burke (PI Jane, Womanthology), and yours truly in my first ever podcast (I had no idea I sounded like a prepubescent male on tape). Finally, I must give thanks to the folks at Reed Pop for throwing a wonderful convention and allowing me to attend on a press pass. I would have paid to come anyway, but it was great to receive recognition for the work I've done on my little blog.

Enjoy these photos and since there are so many, more after the jump!