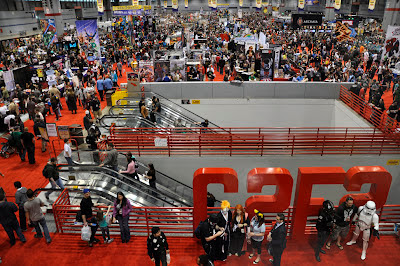 Saturdays are always the biggest day for conventions, and yet it never fails to surprise me just how crazy this day gets. The ability to shop / walk / and talk at your own pace was replaced by the frantic non-stop atmosphere that is Saturday. Attendance wasn't the only thing that was bigger; late comers to artist alley filled several empty tables, more celebrities made appearances, and with the longest hours, there were more panels than any other day. Like Friday, I could not make it to every panel I wanted, and the sacrifice on Saturday was the Womanthology panel early on. I did make it to  the announcement heavy Marvel: Cup of Joe panel. After making a few (overly long) plugs and announcements, the majority of the time was spent on Q&A, and the people giving answers included Editor in Chief Axel Alonso, writers Jason Aaron, Rick Remender, and Jeph Loeb. To quickly go over the big announcements: 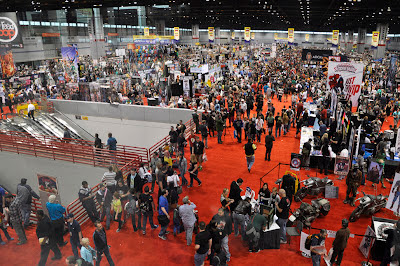 Matt Fraction and David Aja will be the creative team behind a new Hawkeye ongoing series. Considering this is the hit team that brought audiences the very well received Immortal Iron Fist, this is a title to keep an eye on. Young Avengers fans will also want to check out this book as Hawkeye's "sidekick" if you will, is going to be Kate Bishop. This seems a timely choice considering how young female archers are dominating pop culture at the moment. You can pick up this new title in August. The other announcements centered around creative team changes, from Khoi Pham joining Chris Yost on Scarlet Spider, Ryan Stegman joining Hickman's Fantastic Four, and Jeph Loeb will return to unfinished Wolverine tale 'Evolution' with Simone Bianchi on artwork.
During the Q&A, a lot of the usual questions were asked; how does one break into comics the Marvel way, when will so-and-so (creators and characters) come back, will those digital-only comics be collected (yes, eventually). Most answers were carefully directed into promoting current events; will Quinten Quire play a role in Avengers vs. X-Men? No, but read those AvX crossovers in Wolverine and the X-Men. Want to see Brubaker take on more characters besides Cap? He won't be doing a new series, but his Cyclops vs. Cap in issue three of AvX will be worth checking out. Some of the more interesting questions included a fan that was worried that purchasing a digital copy of a comic would take away from the success of the book since it is not counted in print sales. Marvel assured this fan that they are indeed counting digital downloads as part of the overall sale of the title. However, without releasing these numbers to the public, paper sales are still the only way to measure the perceived success of a book (many retailers rely heavily on the numbers provided by Diamond to determine what to order). Until someone else besides Marvel is counting the digital sale numbers, I don't think you can say it is giving books equivalent support to buy them digitally. My question about whether Marvel values keeping a timely schedule over keeping consistent quality on titles was partially answered. Quesada spoke of the need to keep highly detailed product on the shelves, as well as getting them out on time to keep the ongoing universe stories moving. But since many artists can't keep a monthly schedule (or twice monthly as many Marvel titles are now), it is necessary to have fill in artists. They are trying to choose artists that complement one another and sited some very good examples such as Wolverine and the X-men and Amazing Spider-Man, books that have successfully utilized this approach. I did not get the chance to  mention the specific books that have lost my interest due to fill in artists (Ultimate Spider-Man, Punisher, even Daredevil), but I plan to write more about my question and Marvel's response at a later time. One fan requested that Marvel give new characters more chances to star in books and stories, to which Quesada responded that it is not an editorial decision, and rather a result of the current market atmosphere. When sales go up, so will Marvel's ability to provide opportunities to unproven properties. 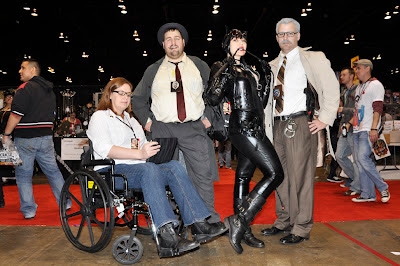 Cup of Joe may have been the only panel I attended, but it wasn't my only opportunity on Saturday to speak one on one with creators. Jennifer Van Meter, writer of Oni Press' Hopeless Savages, was signing at Challengers Comics+Conversation booth for part of the afternoon and I had a chance to ask her how she broke into the industry as a writer. She first established relationships within the comic book community as an academic, and this helped get her known within the industry as a knowledgable and friendly person. While researching a paper on Joss Whedon for her Masters program, an editor from Dark Horse asked Van Meter if she would be interested in writing a Buffy story for the Dark Horse Presents annual. She accepted the opportunity, and this led to a chance to write a Blair Witch Project tie-in book for Oni. They would later release her first creator owned work, Hopeless Savages, the Eisner nominated series. Jen received some sage advice from Mike Mignola early in her career: creators could either be very good, very fast, or very nice. You have to be at least two of these things to be successful. After meeting her, I believe Jen may qualify for all three categories!
In my wonderings through artist alley on Saturday, I spoke with a lot of creators of self-published works, including several funded by Kickstarter like local creator Dave Punk's Robot Envy. Amy Chu, a first time writer, was selling a brand new book of five short comic stories called Girls Night Out. I was very impressed by the high quality of the book, from the artwork to the printing. Amy hopes that this work will help lead to more writing opportunities (check back after C2E2 coverage for more on this title). Justin Peterson's Very Near Mint, a graphic novel series about comic shop employees, has found an audience through direct online sales. Peterson said he doesn't even attempt to offer his books through Diamond because he would actually lose money since the distributor takes a greater cut than what it costs to print the book (you can still purchase it in some comic shops, including local store Challengers Comics+Conversation). The diversity of work within artist alley is a good indication of things to come for the comic book industry. There are more web series artists, self-published, and crowd-funded works than ever. With more people taking different approaches, hopefully the market will become equally diversified as larger publishers take notice of these upstarts.


Last but not least, perhaps the biggest highlight of my day was meeting Kelly Sue DeConnick, writer of the upcoming Captain Marvel comic. I was even lucky enough to receive a Captain Marvel pin! I'll have more to share about that upcoming title and how it came to be in my C2E2 Sunday coverage post. Check back for that tomorrow, as well as a final wrap up post with tons of photos.