Showing posts from March, 2011
Show all

After years of stalled pre-productions for a Wonder Woman film, the creation of David E. Kelley's television series has made surprisingly quick progress. Only a few short months ago, leaked scripts for the pilot were being circulated, and the casting of Adrianne Palicki is still a recent headline. This week saw the first glimpse of our generation's modern incarnation of the feminist icon, princess, goddess, and ass-kicking Amazonian, and more than a few opinions were expressed via the internet. Tempting as it was, I resisted the urge to dispense my immediate reactions, via twitter, blog, or otherwise. I opted to take a few days, and a few looks to reach a final verdict on the new costume. I'm still unsettled, with reactions falling somewhere between considering it a tasteless abomination to reverence for all its kitschy gloriousness. Many criticisms are justified when discussing aspects of the costume's design. Words that accurately describe it include shiny, camp,
Read more

Coming This Weekend To Chicago 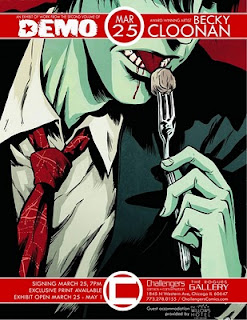 Only a week after C2E2, there are already several comic book related social events here in Chicagoland. Whether you missed the recent convention or you went and were left wanting more, we locals here in Chicago are lucky enough to seemingly always have opportunities to indulge our love for comic books. Here are a few noteworthy events happening this very weekend (March 25th-27th): Becky Cloonan Signing and Gallery Opening Where: Challengers Comics + Conversation in Bucktown When: Friday 7pm - 10pm Website: Challengers "Demo" Gallery Event with Becky Cloonan If you have yet to attend one of Challenger's Rogue Gallery openings, this is your chance to finally see what all of the hub-bub is about. Art collectors get the chance to see pages in person before they purchase pieces for their collections, and fans get the chance to meet and greet with the artist herself, all the while everyone enjoying snacks and refreshments: just like a real art opening! Pick up the n
Read more

Can you find Where's Waldo? No really, he's there. As fans take inventory of their convention purchases, cos-players put away their weekend attire, and vendors and artists pack up what little is left of their merchandise, we all begin to process the long and exciting weekend that was C2E2. This being my first time at the new-to-Chicago con, I opted to go only one day (Saturday), and I have plenty of reasons to get a weekend pass next year. I spoke with many con-goers that were at the show last year, from artist Erik Rose to retailer Pat Brower , and across the board everyone has said that this year the show had much larger crowds (early estimates for attendance have confirmed this ). Though I can't compare, it certainly felt crowded, especially when one tried to browse the merchandise. From personal experience, cons don't usually look  over-picked until Sunday afternoon. Logic dictates that the majority of good deals at conventions are going to be on merchandise tha
Read more

Hathaway just screams spinster The recent announcement of Anne Hathaway as Catwoman has sparked some interesting debate amongst fans. Specifically a few of my nerdy pals, male and female alike, have questioned Ms. Hathaway's potential "sexiness" for the role of Selina Kyle . She may be a little awkward (see Oscars co-hosting gig), and starring in the Princess Diaries nearly a decade ago is an image not easily forgotten; but more recent films have included roles as a recovering addict , trophy wife to a gay man , and an ambitious would-be journalist .  "She's not sexy enough" hardly seems reason to claim she's miscast. And you know, a lack of sex appeal is totally Hollywood's problem these days, right? Not only is this reasoning an insult to Hathaway's acting abilities, but it also implies that the character of Catwoman amounts to little more than an object of sexual fantasy. Little known secret, Hollywood: "sexy" and "talen
Read more 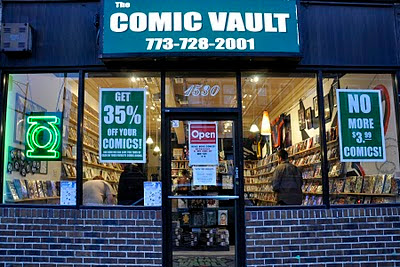 The Comic Vault is an inviting spot along a quiet stretch of Montrose near Clark. (This post is part of an ongoing series where I attempt to visit every single comic book store within Chicago city limits. You can read more about the project here! ) Location: 1530 W Montrose in Ravenswood Public Transit: Nearest buses are the Clark (22) and Montrose (78), nearest train is the Montrose brown line. Hours: Mon - Fri: 11:00AM – 8:00PM Sat: 11:00AM – 6:00PM Sun: 11:00AM – 4:00PM Website: http://www.chicagoc omicvault.com The Comic Vault is another North side store (there are a lot) and it is rather unimposing in appearance, but don't make the mistake of overlooking this shop. The Comic Vault may be slight in scale, but the substance of the store is more than meets the eye. Things must be going well, too since they will soon be opening a second store in the Block 37 shopping center downtown on April 1st. For a business entering their fifth year, ambitious might be an under
Read more
More posts