Comic Book Candy: And Then There Were Two 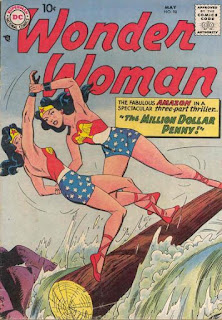 Earlier this week I started receiving frequent mentions on twitter, all with the same content: "Photoset:› @comicbookcandy:›› AVENGERS AND POKEMONS ASSEMBLE!››(By: *[FerioWind] )". Initially, I thought it was well targeted spam (because I'd totally be interested in some Avengers and Pokemon mashup artwork). But then I cautiously followed the link and it became clear where the confusion stemmed from: another blog with the title Comic Book Candy.

A tumblr comprised of various comic book related artwork, gifs, and movie stills, I began to worry that readers may become confused by what site I write for. I've begun to attend conventions as a member of the press with my small comic book related blog, I have contributed guest posts to other blogs as Comic Book Candy, and I comment on various websites as Comic Book Candy. There is no question that we do different things; the tumblr blog is an aggregator while I focus on creating original content in articles, reviews, and commentary. This also means that I am no where near as prolific as someone creating posts 3-5 times a day. The opportunity for confusion would only continue, especially when it comes to auto-generated tweets referring to the tumblr CBC.

After researching if it is even possible to change a tumblr blog name (it's surprisingly simple and doesn't result in the loss of followers),  I hoped for the best and contacted this blogger to see if anything could be worked out: 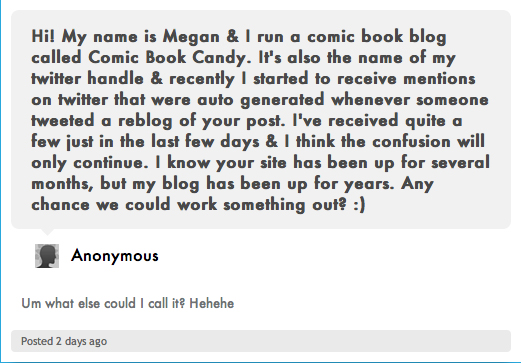 Some bloggers may have tried to rally support from their followers or simply ignored my request altogether. But in a classy move CBC placed my question on her blog, and I happily responded back with suggestions that would still match her current banners.

With no legal right to the name, she did not have to change her tumblr but still did so upon request. In a day and age where the cruelty of the online community is front and center, this is a sign that things may be moving in the right direction. I suggest you check out her tumblr under the new name Comics Before Candy and retweet her posts as frequently as possible; a class act like her deserves generous hits  and a large audience. And with readers like "anonymous", maybe a few more open minded followers will be beneficial as well:

Call it pretentious but I like to ensure that I don't get credit for other people's work and vice versa. The majority of blogs are not for profit, but amateurs are no less worthy of recognition for their work. As part of the good e-karma that is sure to head her way, here's to recognizing this act of kindness by Comics Before Candy with a public thank you, and I hope she snags the twitter handle while she can.