Batwoman: How Far The Mighty Fall 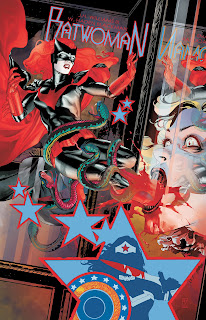 When DC first introduced readers to Kate Kane, the character and her story were met with universal praise. Not only was the story unique for featuring a gay female super heroine, but she was headlining one of DC's oldest properties, Detective Comics, and shocking above all else? It was really good. The stunning artwork of J. H. Williams III combined with Greg Rucka's pitch perfect take on the new character made for a memorable introduction, and it was an origin that was a hard act to follow. Over the last year since the beginning of DC's New 52, Kate Kane's solo title Batwoman has attempted to live up to that legacy forged in Detective Comics. It has failed to reach the same level of quality, proving that artwork alone cannot maintain a series.


Greg Rucka knows how to write women. Sadly, this is still a unique skill among comic book (and film and television) writers. Any writer, male or female that write women well (and the ladies don't do it well by default) is able to do so by depicting them as equally flawed and complex as their male counterparts. Accepting and recognizing that women face struggles differently is integral; but there is a thin line between realistically depicting women and relying on tropes. Mr. Rucka, in a piece for io9 about why he writes strong female characters, offers several reason why many writers falter in their depictions of women: ignorance and the acceptance of a lower standard are among them. Showing struggles unique to women is not evidence of doing the extensive research that is necessary as a writer. Without recognizing one's own ignorance, the final product may instead be unintentionally informed by  popularly held (un)truths. Strong women = Bitch. Sex is power. A woman's body is a matter of public policy. She was asking for it. As long as these sentiments exist, the playing field is not even for understanding and portraying female characters, and writers need to be aware of the societally informed bias they bring to their depictions. With fewer women seen in the pages of superhero titles, the quality of those depictions is even more significant and determines what is acceptable.

Batwoman's story was once a beautifully drawn and engaging journey to read. It is now a beautifully drawn comic that is harder for people to recognize as another mediocre offering because it comes in such an appealing package. In issue #12 of Batwoman, we see Kate's story juxtaposed with one of DC's oldest super heroines. The flaws are a little more glaring when the writing is applied to the iconic Wonder Woman. Co-writers W. Haden Blackman and J. H. Williams III begin by presenting the myths surrounding the goddess as shared from her own point of view. But who is she trying to convince of the truth? She comes across as very godlike indeed; she is completely detached from the reader. This is in contrast to the way she is currently being written by Brian Azzarello. We don't need to be convinced by an inner monologue that she is strong. Her stoic nature, unwavering courage, and the intelligence demonstrated by her actions tells us everything we need to know. Meanwhile, Batwoman finds herself fighting a new foe. The Bloody Mary of legend is a new lead in her continued attempt to rescue Gotham's missing children. Bloody Mary was a child bride that turned murderous when her husband cheated on her (but mind you she only killed the potential mistresses). Of all of the myths that have inspired Bloody Mary, the writers instead chose to create a villain motivated by the threat that someone "might take her man" (direct quote from the comic). What could have been an interesting new villain to add to Batwoman's rogue's gallery is just another one dimensional tale of a woman scorned, compounded by an equally one dimensional philandering husband. To add insult, Bloody Mary has the ability to reveal the nightmarish view of her foes to themselves. What Batwoman sees in the mirror is a vampire-like temptress. So she sees herself in nightmares as dangerous, yet more of a sexual object? It would have been more meaningful had Batwoman looked truly grotesque as her werewolf companion sees himself. Mark my words, an even lazier writer of the future will remember this Starfire inspired costume and use it in a reboot.

Another element that was a staple of Rucka's original introduction of Batwoman was the supporting cast; what we have in the book now is a pale shadow of the formerly varied group of strong characters.  In her time of need, Detective Maggie Sawyer fails to receive Kate's full support because of her duties as Batwoman. Maggie gives her an alternative to come clean about her frequent absences or end the relationship. This exchange is very similar to one between Kate and a former girlfriend in her first issue of Detective. It's a little soon in Kate's history as a character to repeat the same struggles without showing growth or a changed approach. Having recently failed to save her cousin and crime fighting partner Bette Kane from a brutal attack (the second time she's been seriously injured as Kate's partner), one would think Batwoman's interpersonal dynamics would have changed. In the brief view of Bette in this issue, her role as recovering victim is reaffirmed as she expresses fear that damage done by villain "The Hook" could still kill her. Her uncle even calls her his "little clipped wing". Both Kate and Bette are at the same place they were at the beginning of their stories, yet the wisdom of experience should have provided different approaches to similar obstacles (Kate and her relationships, Bette and recovering from bouts with villains).

Without a strong writer to guide him, J. H. Williams III's artwork suffers as well. The layouts are as inventive as ever, Dave Stewarts' color still add to the uniquely gothic feel of the title, but what had once been admirable qualities are missing. The grimace seen on Kate's face when weightlifting or fighting; the motion and posturing informed by her military background; the strong presence demanded by Batwoman filling up a double page spread; none of these are present here. What we are left with is a character that appears to be briskly walking through her own book. Wonder Woman is shown as a buxom pouty lipped beauty, not the warrior of Cliff Chiang and Tony Akin (as seen in the current Brian Azzarello penned Wonder Woman). Our first frontal view of the warrior can be more easily compared to a blow-up doll than a fearsome goddess. We've seen better from Williams, stronger women that kick ass and hold their own beside Batman. Has he lost sight of those important distinctions because it isn't written in the script?

Batwoman as a character is still rather new, and not all of her stories will be well written. But this early on, I won't settle for anything less than the high standard set by her iconic origin. There are too few superhero titles featuring female characters; there is no room for mediocrity. But because it resembles its former incarnation, this title will continue to garner undeserving praise. This is one reader that won't be fooled: a heroine can't just look strong, she has to be well written, too.
Batwoman brian azzarello Cliff Chiang dc greg rucka J. H. Williams III new 52 opinion review W. Haden Blackman