May 10, 2011
The last month my blogging has slowed considerably, but no fear, I have not lost interest in comics. In fact, I've been reading more than ever! My increasingly busy schedule has been in part due to the fact that I have returned to the world of comic book retail. Since its opening in the Block 37 shopping center in early April, I have been a regular employee of Comic Vault Downtown. I thought it best to make an official statement in the interest of full disclosure, especially considering how frequently I write about the retail experience. The only major effect I foresee this having on my blog will be an increase in availability of reading material, and perhaps more frequent spotlights on events occurring at the Comic Vault stores. Thus far it has been a blast working with the Comic Vault crew, and I've had even more fun getting the chance to talk to other fans face to face about the books coming out each week, discovering new series, and being in the thick of it every Wednesday once again. I have also been writing regular reviews for the Comic Vault blog in a series entitled "It Must Be Wednesday" (links coming soon!). As I expressed to owner Matt Sardo upon accepting a position, I still plan to visit other stores on a semi-regular basis, not only for the blog, but because I've always been one to shop around even while having a regular pull file. The ongoing Retail Therapy series will continue soon as well, though my coverage of the new Comic Vault store may be impossible to do without a little bias. I look forward to making more frequent updates to the blog, including an upcoming series entitled Odyssey X where I attempt to read and review every single X-Men title to be released in one month. Things may get ugly, but I hope to be surprised! I wouldn't be a very good employee if I didn't tell readers to stop by Comic Vault Downtown, which is located on the third floor of Block 37 at the corner of State and Washington. If you want to chat comics, or get a recommendation from yours truly, stop on by Tuesday and Wednesday afternoons. This Wednesday will be a good time to check out the new store as Chris Burnham will be signing copies of Batman, Inc. #6 from Noon to 3pm. 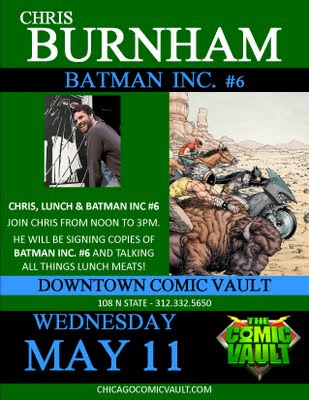