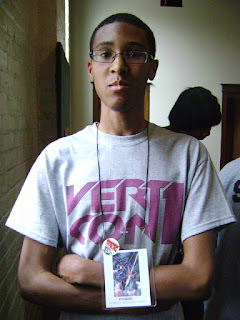 This year Chicago has added one more convention to the mix, and this one is a little different (and no, we're not talking about Cake). Vert Con, a small venture organized and crowd funded by local high schooler and former Comic Vault employee Everett "Vert" Watford took place this weekend in the basement of the All-Saints Church in the Ravenswood neighborhood. With only one local comic shop in attendance as a vendor (First Aid Comics), the majority of tables were dedicated to local creators touting their creator-owned works. Guests of honor included Mike Norton, creator of Battlepug, and Tim Seeley, creator of Hack / Slash. Also in attendance were Batman, Inc. artist Chris Burnham and Atomika creator Sal Abbinanti. Seeing such big names in attendance at such a small gathering made the absence of other well-known local creators more noticeable. Considering the long established Heroes Con in North Carolina also took place this past weekend, it's likely that those missing such as Brian Azzarello, Jill Thompson, Jenny Frison, and Tom Kelly were attending the conflicting event. Another noticeable absence was the lack of female creators, and female attendants as well. I was only able to attend the last two hours of the convention and by the time artists were packing up to leave, there were a grand total of two women left on floor; myself and Bandthology contributor and Double Page Spread podcaster Wendi Freeman.


Like all new conventions, there are good and bad things to build upon. The creators present were impressive in their range of experience, but a variety of content would have been beneficial for attracting a larger audience. Courting female creators, creators of different genres, and organizing a guest of honor from out of town would have created a wider appeal for Vertcon (Darick Robertson was in attendance for a short time but left before I had arrived). The creators  that I spoke with had nothing but positive things to say about their experience with most reporting soft sales, but proportionate to the size of the convention. The space itself was the perfect size for the amount of creators and attendants, but for a hot July afternoon, the non-airconditioned space was quite hot by the end of the day. A change of date might benefit this show in the future since most everyone present was local; holding Vert Con in the "off season" would provide less conflict with other conventions and also allow for more comfortable weather. The space lent itself to presentations with a stage set up at the end of the hall, but it was not utilized for any panels or booths. I was told that one signing with Wendi Freeman did take place on stage earlier in the day before I arrived. More comic shop vendors was also a desire expressed by other attendants.

Overall Vert Con was successful for what it was: an intimate, small gathering of comic professionals meeting with local dedicated fans. It should not go without saying that Vert Con is quite an accomplishment for any new organizer, but especially one as young as Everett Watford. I can imagine there have been few conventions, if any at all that have been successfully organized by someone so young or passionate. With time and experience, should Vert Con continue, it is certain to only get better. 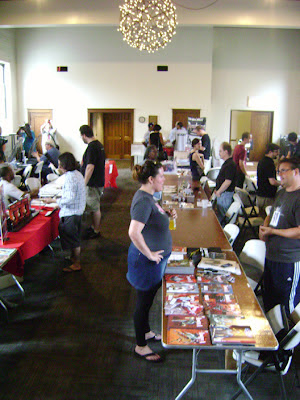