Last year saw a lot of Buffy related presents, and this year Joss Whedon continued to make my house a little happier. Not all presents were Whedonesque, but they were all awesomely nerdy. Here's a rundown of the presents that were received (and given) for Christmas and also my birthday. 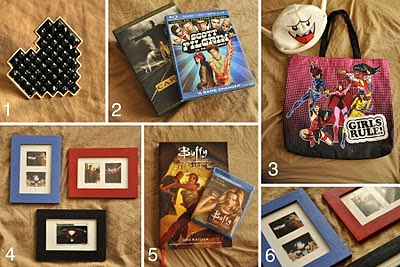 1. 8 Bit Heart Ring from Aldo
This chunky pixelated ring was a self-picked present purchased from Aldo. If I happen to get into any scuffles while wearing this ring, it'll make a pretty good substitute for brass knuckles.

2. Carnivale Season 2 DVD and Scott Pilgrim vs. The World Blu Ray DVD Combo
The husband really delivered this year. Now that we have finished the Angel: Complete Series DVD box set from last Christmas, we can enjoy Carnivale as well. For those who don't consider this to be a nerdy gift, keep in mind that this is the series that writer / producer Ronald D. Moore made in between his work on Star Trek: Next Generation and Battlestar Galactica. It's an overlooked Depression-era series that focuses on the lives of traveling carnies. It's a slow burn, and from what I hear the series did not get a proper finish, a la Firefly, but I'm sure I will enjoy it nonetheless. If you aren't sure how I feel about receiving Scott Pilgrim vs. The World for Christmas, just read my review.

3. Women of Marvel Tote Bag and Nintendo Boo Hat
I've used this tote bag once since Christmas and I've already been given several compliments on its awesomeness. What makes it so great is the fact that it features somewhat obscure characters, at least for those who don't regularly read comics. There's Patsy Walker, aka Hellcat, Black Widow, Scarlet Witch, Spider-Woman, and Elektra. If I'm feeling especially proud of my nerdiness, I can go out wearing my Boo hat at the same time. It looks really great when worn in the snow, and it's warm, too!

4. Framed Star Trek: Next Generation Season 1 Stickers
I found these at the Graham Crackers Comics in Lincoln Park and wasn't sure how I would use them; eventually I decided they were unworthy of simply being stuck on objects like sad Trapper Keeper decorations. No, these needed to be properly displayed. And thus hand-cut mats were made and secret Christmas-gift-making commenced. The husband was very pleased.

5. Buffy Tales HC and Buffy Season 8 Motion Comic DVD Blue Ray Combo
Did I mention how great my husband is at picking gifts? He pretty much got me exactly what I wanted. The Buffy Tales HC includes Tales of the Slayers, Tales of the Vampires, and a few extra one shots. Pretty much everything that is not included in the Buffy comics proper. These are series that I normally would have ignored as unnecessary tie ins, but they are actually kind of great. Some of the creators featured in these books include Tim Sale, Gene Colan, Joss Whedon, Jane Espenson, and Leinil Yu just to name a few. It's a must read for any Buffy fan that is curious about slayer history. Continuing with the Buffy gifts, I also got the Season 8 Motion Comic. This is one item that I would not have gotten for myself but that I have been very curious about. They did not secure the original cast members for the voices (let's face it, Sarah Michelle Gellar is the William Shatner of the Buffy Universe, and she would never do this). At the end of the day, the comics, though written by Joss Whedon, were intended for comic book form and are best enjoyed that way. That doesn't mean these aren't fun to watch. I just hope they work as intended and get curious fans of the show into reading the comics.

6. Close Up!
Feel free to click on the image to see the details of all of these wonderful gifts. I'm very thankful to all of my friends and family members that got me these items. You made my Christmas and 20-something birthday all the more enjoyable.