January 09, 2011
The blog has been very Chicago-centric lately, but clearly this town has a lot going for it. Mark your calendars now for these current and soon to happen events! 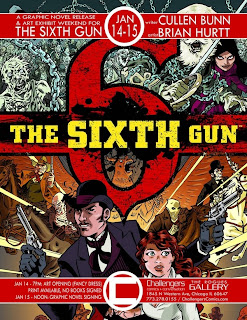 With all of the holiday hub-ub, I missed the first official gallery opening in December at Challenger's new art space, the Rogue's Gallery, but here's another chance to see fine art on display and also meet with the creative team behind The Sixth Gun. Did I mention this is taking place at a comic book store? Sure, stores have signings, but how often do you get to see the original artwork at the same time? The opening night even features a fancy dress reception. Social events at this store are a hot ticket, so get there early!

New Chicago Comics at the MCA featuring Jeffrey Brown, Lilli Carré, Anders Nilsen, and Paul Hornschemeier
Where: The Museum of Contemporary Art in Chicago
When: January 8-30 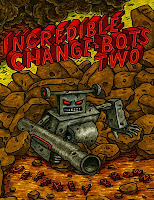 This exhibition at the Museum of Contemporary Art of Chicago will feature (among others) one of my favorite independent creators, Jeffrey Brown. If you are not familiar with his work, check out Incredible Change-Bots, his hilarious Transformers parody with a soon to be released sequel, Incredible Change-Bots Two coming in a few short months. Here's more info about the event:

"For the month of January, the MCA presents an exhibition of the work of four young, Chicago-based cartoonists and animators: Jeffrey Brown, Lilli Carré, Paul Hornschemeier, and Anders Nilsen. In their own unique styles each of these artists expands and challenges the conventions of a visual art form for which Chicago continues to be renowned: the comic book."