Warning: This review includes ample SPOILERS. There's no pussyfooting around the ramifications of Season 8.

I've just finished BTVS #40, the final issue of the ongoing series of comics dubbed Season 8, and I am pretty bummed to see this story come to an end. Since I am a rather late comer to the Buffy franchise, this is the first time that I have finished anything within the Buffyverse without having something to immediately follow. I didn't have to wait months between seasons, or years between the end of the show and the beginning of the comic. I didn't even have to wait long for the first 30 issues of the comic either; I read those in trade paperback and only recently read the comics issue to issue. A few years ago I would have said that I didn't read the comics because I didn't think they could possibly live up to the quality of the show. Deep down I knew really just wanted to wait so I could read them all at once.

Last Gleaming concludes a few months after the events of the battle between the slayers and Twilight. To recap, Buffy won the battle by destroying the source of power for both sides - all magic within this dimension. To say she has created a few enemies from these actions is an understatement. The army of potentials-turned-slayers are furious with Buffy for eliminating the future of their recently discovered heritage. Wiccans the world over, including Willow, are equally pissed off over the loss of their powers entirely (unlike the army of slayers, they did not retain their powers post-magic since it was something they wielded rather than inherently had / were like vampires and slayers.). People are predictably pissed off, but in Buffy's defense, the war that began in Season 7 was much like a war between two limbs on the same body. As Willow states in this issue, magic was the heart of the world, and slayers and evil were just an arm and a leg on the same body, constantly fighting but both drawing power from the same well. If there was ever a theme that drove these last 40 issues, one that could have easily been drawn from the events at the end of Season 7, it is that the slayer army and their opponents are two sides of the same coin. The re-balancing Buffy aimed to achieve by empowering the potentials had the unintended consequence of making herself and her fellow slayers into something that more closely resembled what they were fighting. Nothing demonstrates this more aptly than the character of Simone, the rogue slayer (and future villain for Season 9 from the looks of this issue) who has always had preoccupations with guns and power. One corrupted slayer can be easily identified and contained; a whole army of corrupted slayers presents a much more dangerous threat.

I kind of went on a "Season 8 Themes" tangent; just to clarify where we are in this issue, Buffy is a waitress again. Xander and Dawn are living together (!!!) while Buffy sleeps on their couch. Willow has dumped Kennedy because she finally realized Kennedy was the rebound girl. Giles is dead and he's not coming back. Angel is in a catatonic state after (kind of) killing Giles. You would think such a downer issue wouldn't be that enjoyable to read, but leave it to Joss Whedon to make you laugh, cry, and squeal all in one issue. No one writes the witty banter between characters like Whedon. Dawn even calls herself the Scrappy Doo of the gang. Willow and Buffy know each other so well they can have an argument and still manage to hold hands while they do it. We even get a classic Spike / Buffy moment where he predictably plays the role of cheerleader for Buffy that ends with him getting rejected. Everything is different in the world of Buffy, but it's kind of the same.
﻿
The writing for this series has taken a very meta turn in its conclusion; much like Buffy's realization that you don't change the world over night, Joss Whedon also shows that he has realized he can't change BTVS over night either. The strength of the series, and the connection it has with viewers / readers, is because of the flawed humanity of the characters. Their relateability stemmed from their struggles to deal with with life under extraordinary circumstances (one of my favorite quotes from Whedon concerning season 6: "Life is the big bad!"). Even while she dusted vamps, slept with vamps, and saved the world, Buffy still had to deal with things like getting a job and not knowing how to drive. Given the unlimited possibilities for the series in comic book form, he took these characters to places where they never could have gone in the show; the story became about an organization of globe trotting, time traveling, magic-weilding super-heroes. Once these desires were indulged (and the zany adventures were enjoyable to an extent), it became clear that getting back to basics and fighting the good fight is where Buffy and the Scoobies belong. Losing sight of this came at a dear cost to Buffy in the death of Giles. I didn't really deal with him dying until this issue. I was hoping for some kind of comic book wackiness where he stands up and walks away, laughing with Buffy at the absurdity of death (because they can share stories about crossing over now) and everyone would be happy, the end. The possibility of his resurrection disappeared as I read about everyone's lives continuing without him. His absence is acutely felt once everyone numbly assumes the roles of aimless 20-somethings (oh how I relate!). Giles is no longer there to help steer the course of their fates, the older and wiser ones are gone.

Confession: I hate the fact that they killed Giles. But that has little to do with how they did it, or why, but only because I love Giles so dearly. A lot of my favorite episodes are very Rupert heavy (Band Candy, Passions), and the comics never quite got the tone of his dry humor. Instead of a loving but stern father figure, the comic book Giles took on a distant role as he spearheaded the black ops on Buffy's behalf while he investigated his suspicions about the growing threat of Twilight. What we get in return is a strengthened relationship between Giles and Faith, the extent of which is shown when it's revealed that Giles has left his entire estate to Faith. Sort of like leaving everything to the wild step-child. Even after losing her mentor, the faith of her best friend Willow, the (kind of) betrayal of her lover Angel, and gaining the ire of a legion of super-powered former slayers, the truth of Gile's final wishes is what reveals Buffy's heartache. The moment is perfectly rendered by Georges Jeanty in one panel showing the shocked, blood shot eyes of Buffy. At the end of the day, leaving Buffy the one possession of his watcher's book Vampyr, is the last lesson for his student, and Whedon having written it as such, is a final message for his fans. It's time to get back to basics.


Buffy and Angel's love is forbidden and better unrequited. Willow Rosenburg is not the sum of her parts. Xander is the normal one. Dawn is Scrappy-Doo. And Buffy. Well, she kicks ass. I may not have anything new to experience in the Buffyverse, but I have a pretty good idea where I should go next. Season 1 anybody? 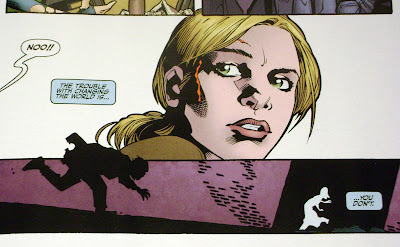