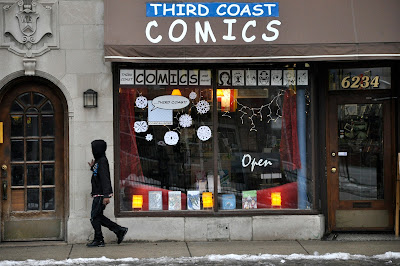 Monday Closed
Tuesday 11:00 - 6:00
Wednesday 11:00 - 7:30
Thursday 11:00 - 7:00
Friday 11:00 - 7:00
Saturday 11:00 - 7:00
Sunday 12:00 - 6:00
Website(s): http://www.thirdcoastcomics.com/
Third Coast Comics was a great place to start my comic book store project (more details here). It's a well lit, well stocked store with friendly staff. First off, I did not inform employees of the project until after I'd had a good browse around. Doing this gave me a better impression of how any customer off of the street would be treated as opposed to the girl carrying a massive camera and asking lots of questions (that comes later). I came in on a Thursday, a relatively quiet day, but several customers came and went during my walk through. You won't get a better impression of a store than by seeing how customers are treated and how they interact with the staff. One gentleman came in with his very young child, asked owner Terry to recommend a book, and purchased it without thinking twice. A few more regulars came in looking for their books on hold or special orders. In short, no one walked in without talking to Terry.

After quietly observing for several minutes, I asked for permission to take photos and ask a couple of questions for the blog. You can see from the many pictures that I had a lot of fun showing off this store. They use a rather unique system for displaying their books, and it threw me off at first. Most stores stick to a pretty predictable filing system. Marvel, DC, everything else. Alphabetized. Trades. Not Third Coast Comics. You may have to ask to find certain books, but it doesn't take long to get the hang of it. Like books are next to like books. Event titles are in one section, X-books are in another. Women who kick ass are in one section while Supes and Spidey share shelves. When asked what brings folks into the store, the first things Terry pointed out were the variety of titles and the store's aim to meet customer's specific wants and needs. If a customer wants Noir, there's a whole section for it. If they like local artists, there's a section for that, too. The "if you like this, try this" wall pretty well sums up the store. Another interesting point that Terry made was that about 48% of their regular customers are female (regular being readers with subscriptions). That's rather impressive considering the average number of female readers hovers around 20%. Having girls come in regularly says a lot about a store's atmosphere. You'd be surprised by how many establishments can still make you feel like a three-eyed freak if you happen to be a female comic book fan. Especially if you are looking for The Boys vol. 3. I'm sure it helps that a sizable portion of the store's employees are also female, as evidenced by their store recommendation section.
As for the rest of Third Coast's offerings, there were a few kitschy items like Captain America shot-glasses, and Star Wars chop sticks (items I would totally purchase). But for the most part, this is definitely a store about the books. You'll have to special order your Batman statues and Marvel Select toys. As Terry pointed out, space is limited and they want to keep the focus on the comics. Even with the limited selection of novelty items, there was more than enough to browse. Girl size t-shirts! Love it.
Finding things to complain about this store is a lot like that bullshit question in job interviews where you are asked to state your biggest weaknesses. You'll most likely get a bullshit answer, and the same is true here. They only carry Scalped in trade form? That's all I've got. This store has many regular events from an arts night (I love combining crafting and comics!) to a sci-fi book club. There are also signings at the store from time to time, and Terry hopes to schedule one for January. In other words, there are more than plenty of reasons to come out to this store during the cold winter months. Consider Third Coast Comics enthusiastically recommended!
Chicago retail retail therapy third coast comics