January 04, 2011
Here we are, another year older, wiser, and with lighter pockets. Twenty-ten brought a lot of changes to the industry, and this year will surely be remembered as a turning point. All major publishers are now offering an outlet for digital comics, and the growing popularity of the iPad and other digital tablets is a game changer with results yet to be seen. Many months posted lower direct market sales than last year, proving that no industry is recession proof, and that giant crossover events do help individual issue sales after all. Without Blackest Night to make many DC titles “must reads”, sales have slumped, a theory that I myself support considering I dropped all tie in books upon the crossover’s end. The return of Bruce Wayne hasn’t resulted in any shake-ups either, in stories or sales. (It might’ve helped DC if readers did not see this predictable non-event coming). Despite gimmick after gimmick (the new and vague Heroic Age, enough Deadpool titles to rival the X-books, vampire stories in not one but two Marvel titles), readers failed to embrace any series en-masse in the Marvel section. I have a hard time thinking of one “hot book” with sizable appeal this year from either of the big two. What do come to mind are many well written, standout individual issues, comics that will stick with me longer than your usual flash-in-the-pan hit. Publishers may be sweating over year-end sales figures, but I consider myself a very satisfied customer. If you found yourself feeling under-whelmed by the offerings this year, get out there and hunt these issues down. They will restore your faith in individual issues! And in no particular order.... 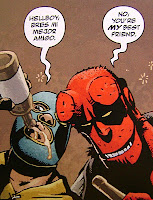 This series has been consistently outstanding for the past two years, so when an issue stands out as one of the best amongst them, it's worth higher praise than usual. That being said, this may be my favorite individual issue of the year.  Mignola has struck a fine balance between telling stories that are enjoyable to long time fans and newer ones like myself. Every issue feels like a revelation, but without the use of cliched writing devices like plot twists or melodrama. It's just plain good storytelling. Hellboy in Mexico is a story within a story; while Abe Sapien and Hellboy are stranded in Mexico after a  B.P.R.D. mission, they come across a memorial covered in photos of Mexican wrestlers - with Hellboy standing shoulder to shoulder with them. He tells Abe of that first trip to Mexico in '56, and it's a heartbreaking tale of sacrifice that reveals as much about the character of Hellboy as you could get from years of reading his stories. On an interesting side note, the story shares many similarities with an episode of Angel in Season 5 called "The Cautionary Tale of Numero Cinco". I'm sure it is strictly coincidental, but what are the odds that there would be two great stories in popular culture about Mexican wrestler brothers fighting vampires?

The Man With The Getaway Face

You won't find a better deal in 2010 than this single issue preview of Parker: The Outfit. At $2.00, it's hard to believe that this lush, over-sized comic could make publisher IDW any profit. How can such a fantastic, ad-free issue possibly be produced for half the cover cost of one issue of Dark Avengers? Even though the content of this was later published in Parker: The Outfit, it is still worth owning just for the larger-than-golden-age size artwork. It takes Cooke's chic two-tone illustration from eye candy to work of art.

This final issue from creative team Marjorie Liu and Daniel Acuna concludes the well crafted mystery-tinged espionage tale "The Name of the Rose". Natasha has been secretly storing intel on the Avengers as a just-in-case-one-of-them-goes-evil scenario. But when an unknown enemy reveals this to the U.S. government, authorities who still question Natasha's loyalties turn her into a fugitive as she hunts for her adversary. What makes this issue one of the best this year can be summed up in a few short words: Brain. As. Weapon. 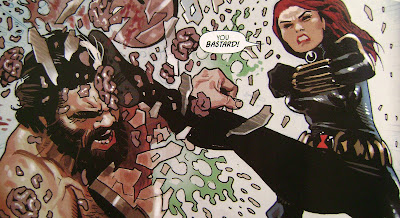 Any book that begins by setting the location as "Motherfucking L.A." is guaranteed to be a bad-ass read. In this one shot we are introduced to Officer Downe, a takes-no-prisoners man of the law, as he fights his one man war against the  crime bosses of L.A. Only he isn't just one man. He's one man continually regenerated after each increasingly gruesome death that is brought upon him by ninjas, drug dealers, and other various psychotics. There's enough blood and guts in this book to make Paul Verhoeven proud. I'm not sure who is more diabolical: Joe Casey for writing it, or Chris Burnham for bringing this story to life. Let's hope we'll see more from the team's twisted minds in the future.

Several issues of House of Mystery brought the lol's this past year, but issue #27 definitely tops the list for most memorable. The main story revolves around a war between witches, troll allies, and killer robots (enjoyable to just about anyone, but that part may be a bit involved for those who are new to the book). However, this title is very accessible to new readers because there are almost always self-contained stories told within each issue. "Long Strange Trip", the short story of this issue, is a standout moment for the series. A time traveling guide to our main characters explains how he first learned of the mystic arts during an acid trip in Vietnam that seemingly lasts for years. It's only a few pages long, but it perfectly encapsulates the tone of the book's humor. This under-the-radar title definitely deserves more attention, and this story is a prime example of why it is worth reading. 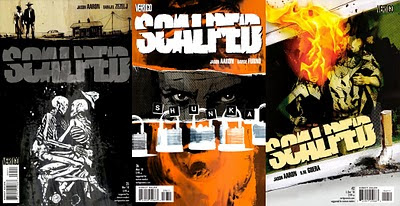 I probably could have saved myself the trouble and said, "Every issue this past year from Scalped" and had 12 fantastic books for you to read, but for variety's sake I have only included the three best issues from Jason Aaron and company for this list. And trust me, it was tough to narrow it down to just three. #35 is a standalone issue about an elderly couple who despite living far off of the reservation still can't escape the hardships that face their downtrodden people. Their unspoken anxiety is beautifully portrayed by Jason Aaron's frequent use of inner dialogue within the same panels. #36 is the first of a two part story about Shunka, a closeted gay hitman working for Chief Red Crow. It is a deliciously Noir tale that takes us off the reservation; even the male love interest is a perfect femme fatale. The subject of homosexuality in Native American culture was obviously researched for the story, another example of Aaron's meticulous storytelling. Lastly, issue #42 concludes the "Unwanted" storyline as two of our main characters face some very tough decisions that parallel the struggles of their parents. It begins with a heartbreaking "what if" scenario that is so hard to read because you know that no one in Scalped is ever that happy, even though they could be.


That concludes my "Best of" list for 2010. I know that these things traditionally go up before the next year, but I thought I'd shake things up and do it a little differently this new year's. Actually, the whole blogging-without-the-internet situation is coming to a head. But that will hopefully be changing in the near future, so stick around, loyal readers....
2010 best of black widow dark horse hellboy house of mystery idw individual issues man with the getaway face marvel officer downe scalped vertigo